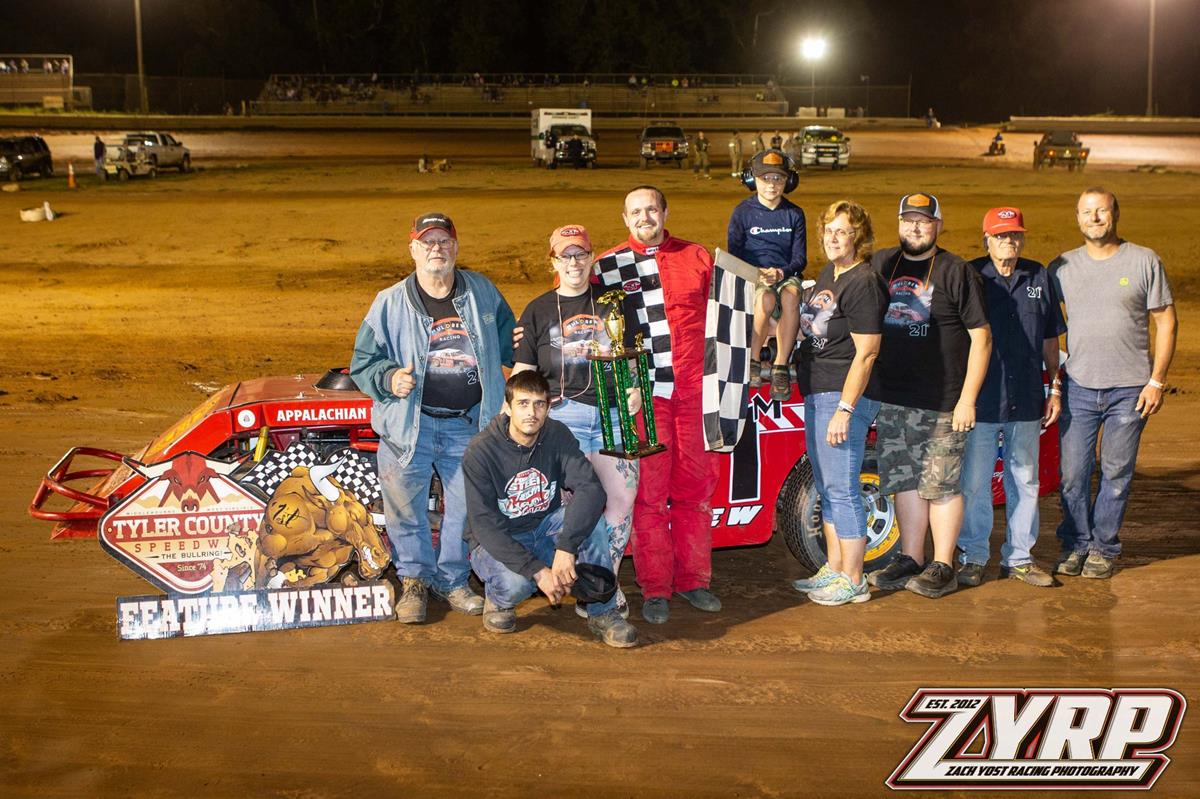 Tyler County Speedway would welcome the ‘Bullring of Honor’ Inductees along with hosting the Bullring Booster Club Night and highlighting the show was the annual Workin’ Man World Championship for the EDGE Hotmod division. A great deserving class of ‘Bullring’ icons including Denny Klug, Charlie Maloney, Gib Patt, Norman Jackson, Carl Short and Steve Davis would be inducted at intermission into the ‘Bullring of Honor’ in front of the appreciative crowd. A fast racing surface would be in store for the Hino Pit Area as Daniel Muldrew, Shawn Jett, Logan Reed, Cody Brightwell, Rex Frohnapfel, Jacob McDaniel, Cruz Thomas and Leah Brightwell would pick up trips to the West Virginia University of Parkersburg Victory Lane.

In the seasons biggest event for the Sigler Fabrication EDGE Hotmod division it was Daniel Muldrew going back to back in the Workin Man World Championship as the talented racer claimed the 2021 edition as well. The driver of the 21m would run a flawless race with a hooked up car as a host of the divisions top runners would pursue throughout but had little for Muldrew. Following Muldrew in the J&L Auto Body/ Big Red’s Shanty/ Denny’s Blue Angel/ Appalachian Merchantile/ Ohio Valley Awards/ Emerald Waves Photo/ Sigler Chassis to the pay window was Jeff Gorrell, Brian Probst, Steve Magyar and Eddie Probst.

Always great to see a young racer pick up a first and on Saturday Night, Pennsboro, WV’s Logan Reed would garner his first ever McClinton Chevrolet Mitsubishi RUSH Late Model feature win. The young talent would run a flawless race not wilting to the relentless pressure from AJ Spagnuolo throughout. Reed would park the Hawkins Towing/ Palomino Pastures/ Willow Land Surveying/ Rocket Chassis in the West Virginia University of Parkersburg Victory Lane ahead of AJ Spagnuolo, Donnie Dotson, Ryan Hare and Garrett Paugh.

Defending track champion Cody Brightwell appears to be warming up as we head down the stretch towards Hillbilly weekend. Brightwell would see early season gremlins hamper the popular driver but hopping aboard the Paul Baker owned 8x has seen back to back trips to the winners circle in Jenkins Auto Parts UMP Modified division presented by J&R Excavating. Brightwell would secure the win ahead of Doug Carson, Chad Smith, Jeff Fornash and newcomer Mark Baier.

It’s starting to sound like a broken record in the Dual Threat Sports Cards SCDRA 4 Cylinder division as Jacob McDaniel is dialed in at the ‘Bullring’. The driver of the McWilson Performance #22 would snare win #9 on the season ahead of Joey Price, Mitch Eddy, Bill Doll and Timothy Harlan.

In the evenings opening events it was current point Leah Brightwell scoring her 5th win of the season in the Veteran Mini Wedge division over Peyton Baker and Kaden Sexton. Cruz Thomas would capture win #9 in the Junior division ahead of Kyndi and Bryar Glover. The evenings trophy sponsor was Glover Strong.

Join us next Saturday Night, August 20th as the Tyler County Speedway will play host to its last regular season race before the Labor Day weekend Hillbilly 100. A big night of action will await as we host the Season Championship in all classes along with Hillbilly Qualifiers in the RUSH, UMP, Sportmod, Hotmod and SCDRA divisions. 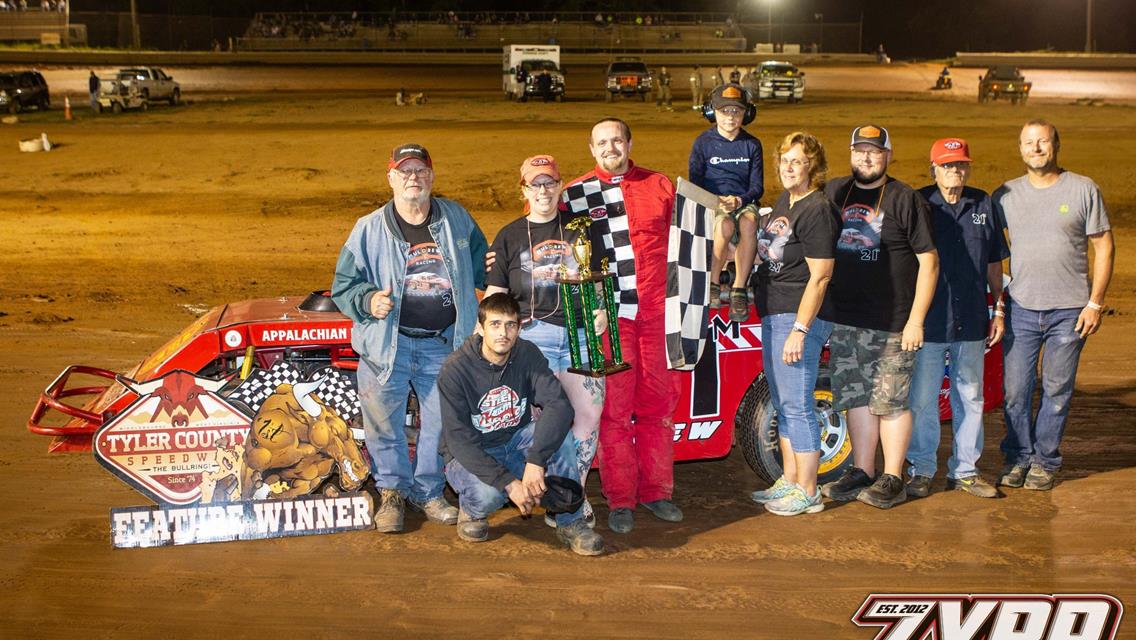 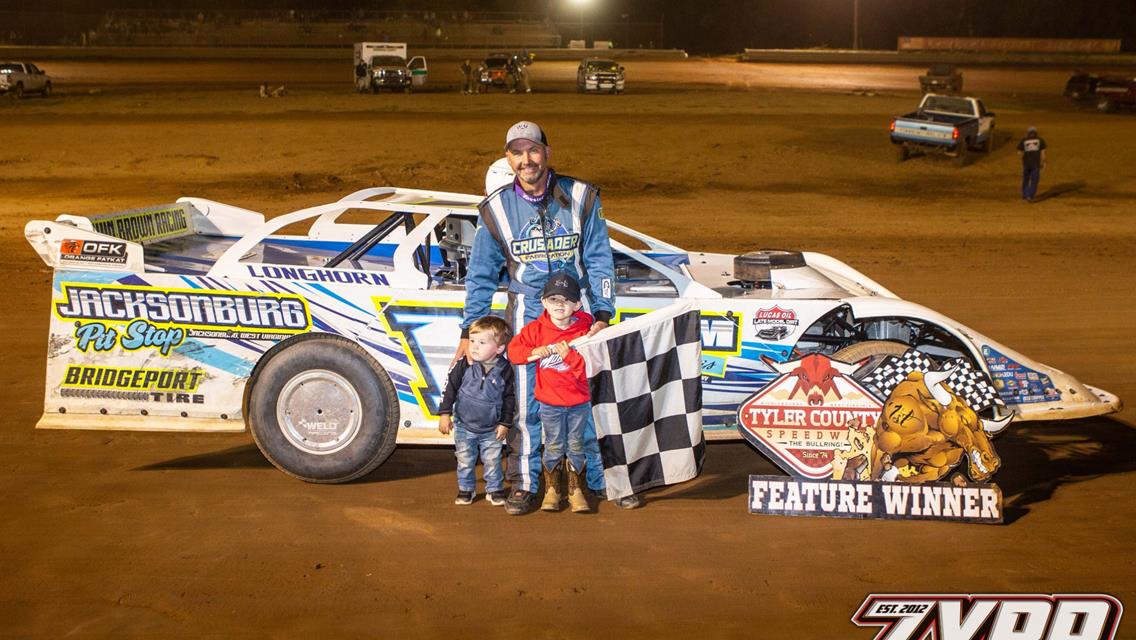 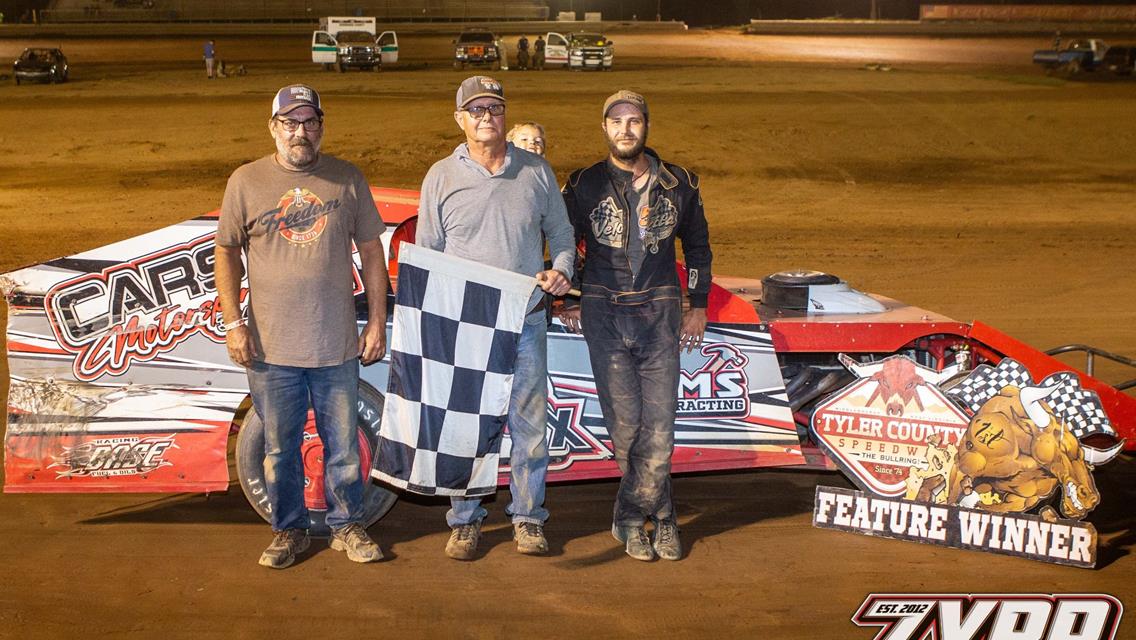 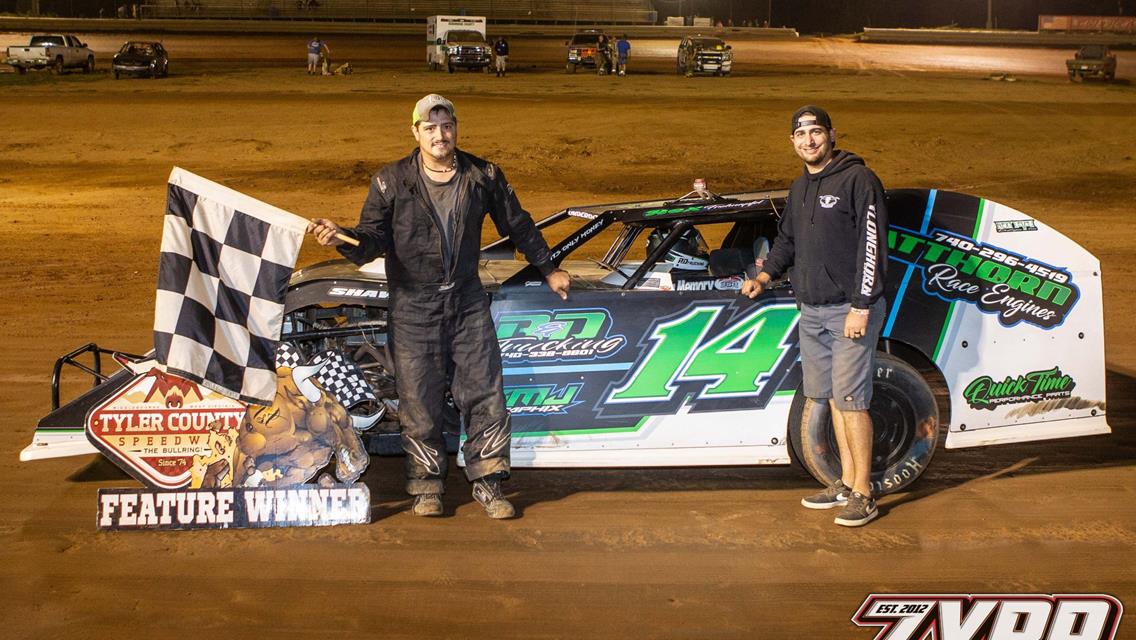 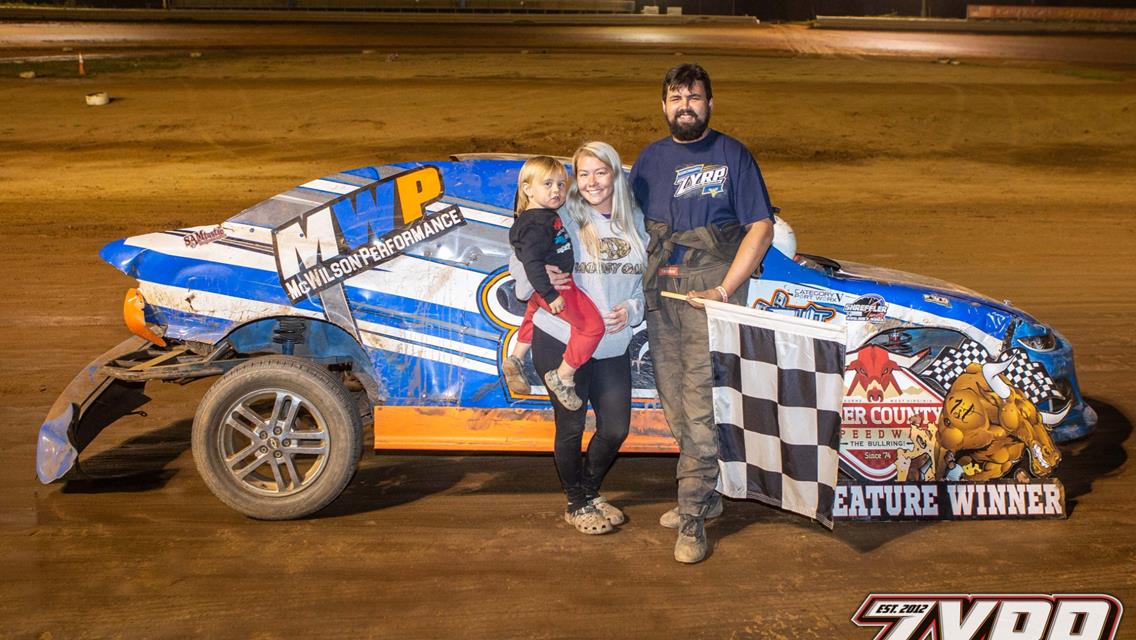 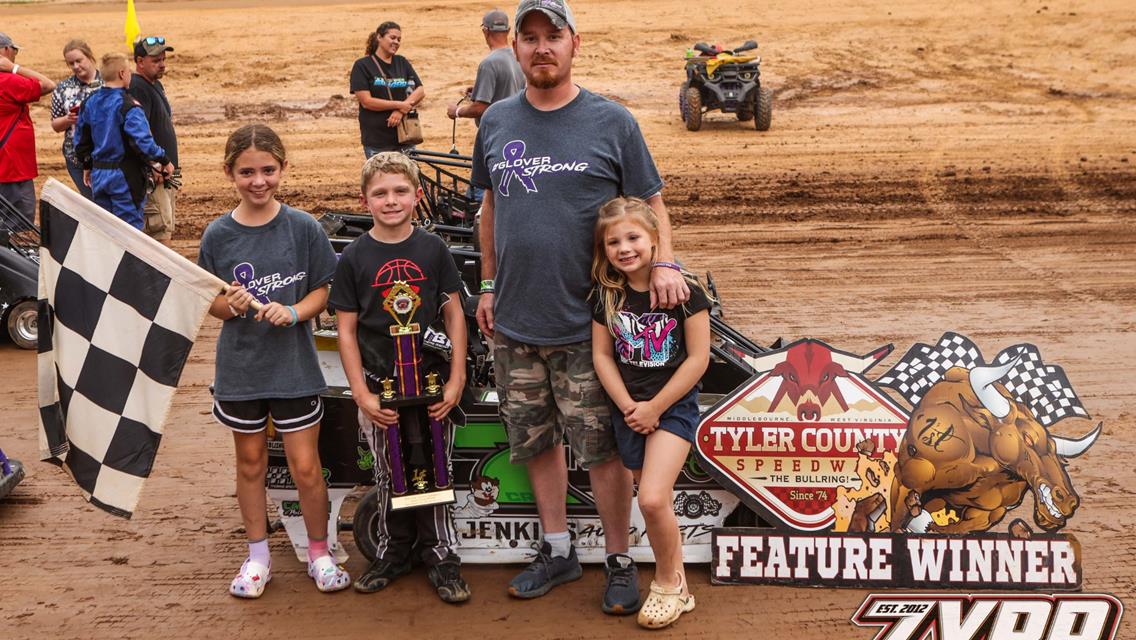