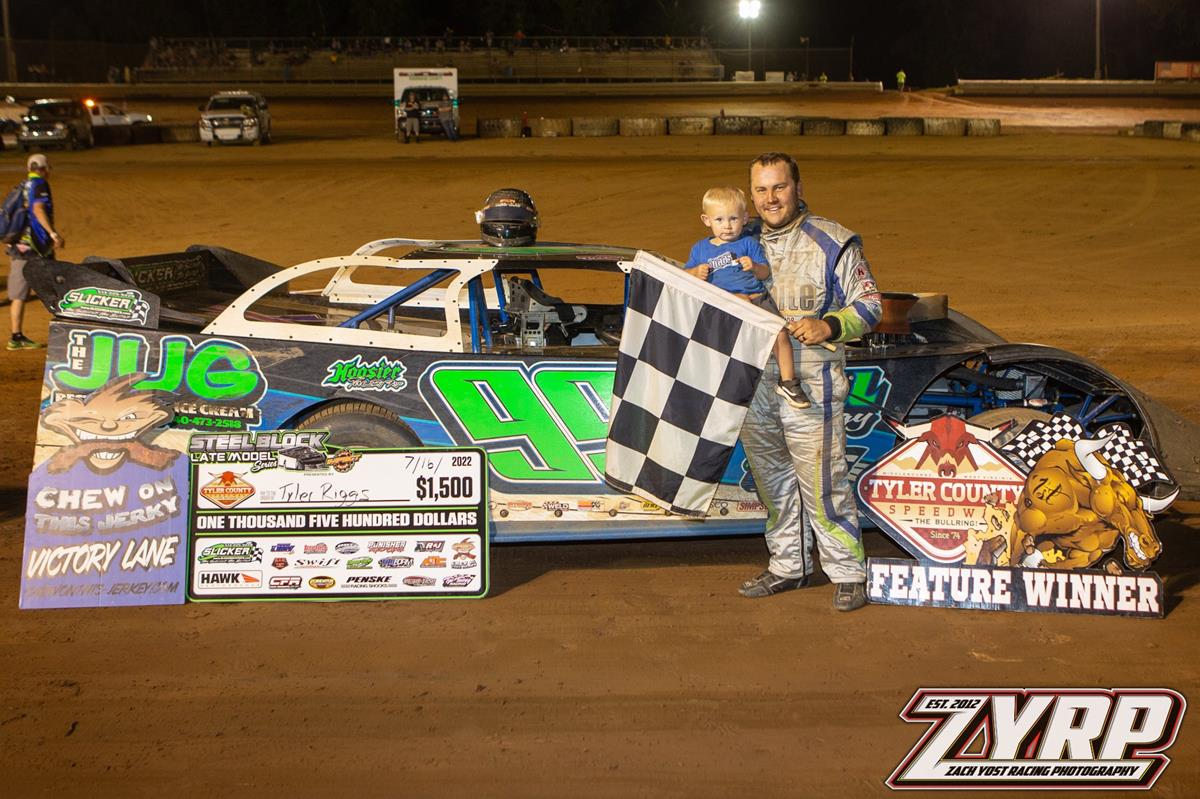 The Tyler County Speedway would overcome a gloomy forecast and dodge the rain drops all around to present another exciting night of action. It was a night of first at the ‘Bullring’ as it would be Kyle Thomas becoming the first repeat winner in the Late Model division while Tyler Riggs, Daniel Muldrew, Rex Frohnapfel, Patrick Willbarger, Cody Wittekind and Mack Brookover all picking up first feature wins of the season. Frequent winners Chad Smith and Cruz Thomas would also garner trips to the West Virginia University of Parkersburg Victory Lane.

The Steel Block Late Model Series would make their 2nd appearance of the season at the ‘Bullring’. A strong 13 car field would take to the high banks as a lightning fast surface would challenge all. Perennial winner Daniel Hill would vault to the lead in the sharp looking GRS1 machine with Riggs glued to his bumper. As the race entered the late stages it was Tyler Riggs ratcheting up the pressure on Hill and as the duo sped out of turn 2 on the white flag lap Riggs would pull along side and out drag Hill down the backstretch to pull ahead and pick up the feature win. Following the New Matamoras, Ohio racer to the payout window was Hill, Zach Milbee, Matt Melvin and Corey Delancey.
Pennsboro, WV’s Kyle Thomas would become the first repeat winner in the Stutler Motorsports Super Late Model main event. A light field would blast the speedway’s cushion for 20 fast laps with Thomas garnering the checkered over Shawn Jett, Chuck Kimble, Steve Weigle and Derek Doll.

It was Wheeling, WV’s Daniel Muldrew driving his 21m rocket ship to victory in the Sigler Fabrication EDGE Hotmod division. The win was Muldrew’s first of the season and he would best Kevin Dotson, Zack Robinson, Allen Clark with Steve Magyar rounding out the top five.

In his maiden voyage of the season, St. Clairsville, Ohio Rex Frohnapfel would snare the win in the Middlebourne Galaxy Food Center Sportmod feature event. A very eventful main event that would see early leader Tyler Spencer experience problems along with point leader Steven Dotson turning the point over to an opportune Frohnapfel. Once in the lead the driver of the Hatthorn Race Engines/ R&D Trucking/ KMJ Graphix/ Next Level Designs Shaw Chassis would take the checkers ahead of Sonny Leek, Toby Wilson, Josalyn Hibbard and Brandon Lewis.

A tremendous Dual Threat Sports Cards SCDRA 4 Cylinder feature would see Ravenswood, WV’s Patrick Willbarger garner his first feature win of the season at Tyler County Speedway. A great two man race with Willbarger at the point challenged by the 22 of Jacob McDaniel for the races duration as McDaniel would throw the kitchen sink at Willbarger but the driver of the c19 wouldn’t shake and run a smooth race to claim the hard earned victory. Following Willbarger and McDaniel across the line were Mason Wolfe, Timothy Harlan and Mike Tennant.

In the Mini Wedge class it was Cruz Thomas parking it once again in the West Virginia University of Parkersburg Victory Lane ahead of Bryar Glover and Owen Sobota in the Junior Division. In the Senior class it was Mack Brookover laying claim to his first win of the season at Tyler County ahead of Erickson Smith and Leah Brightwell. 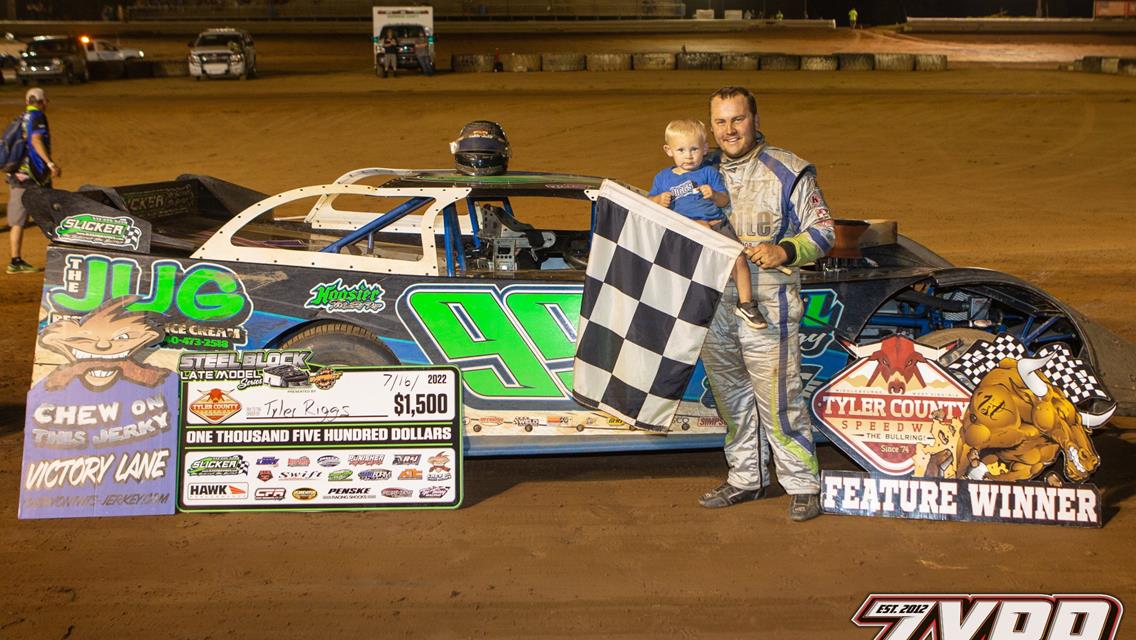 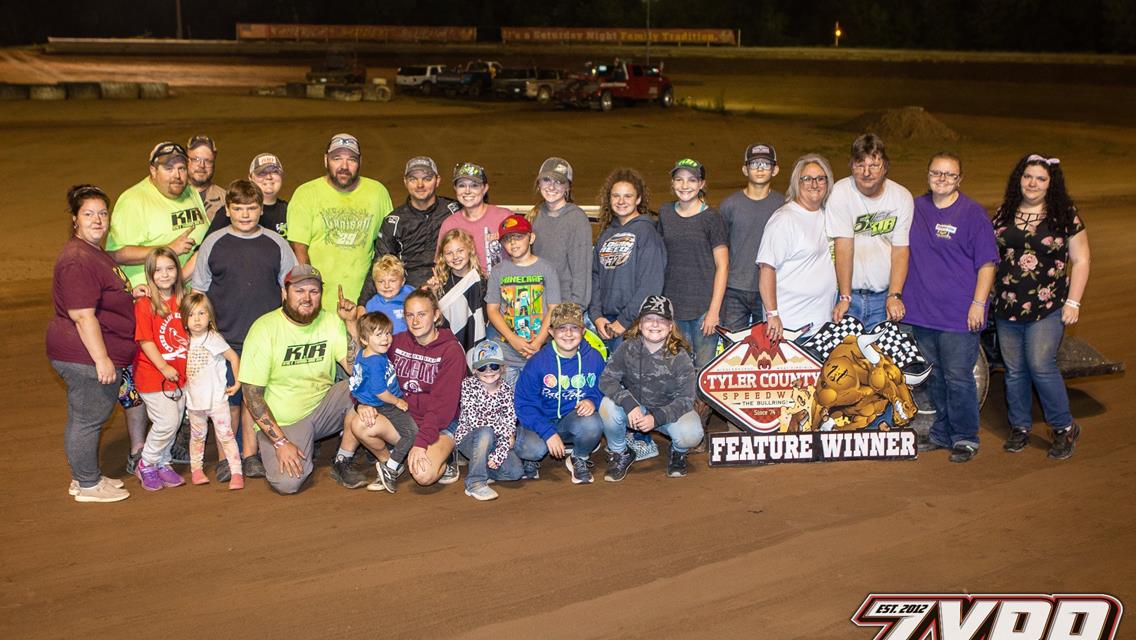 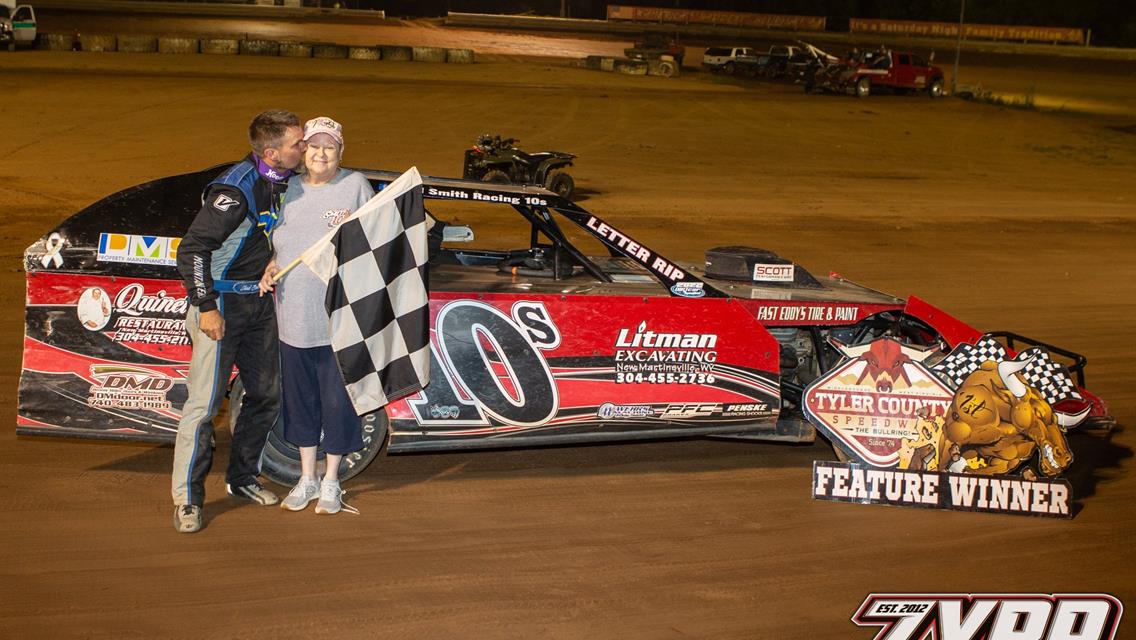 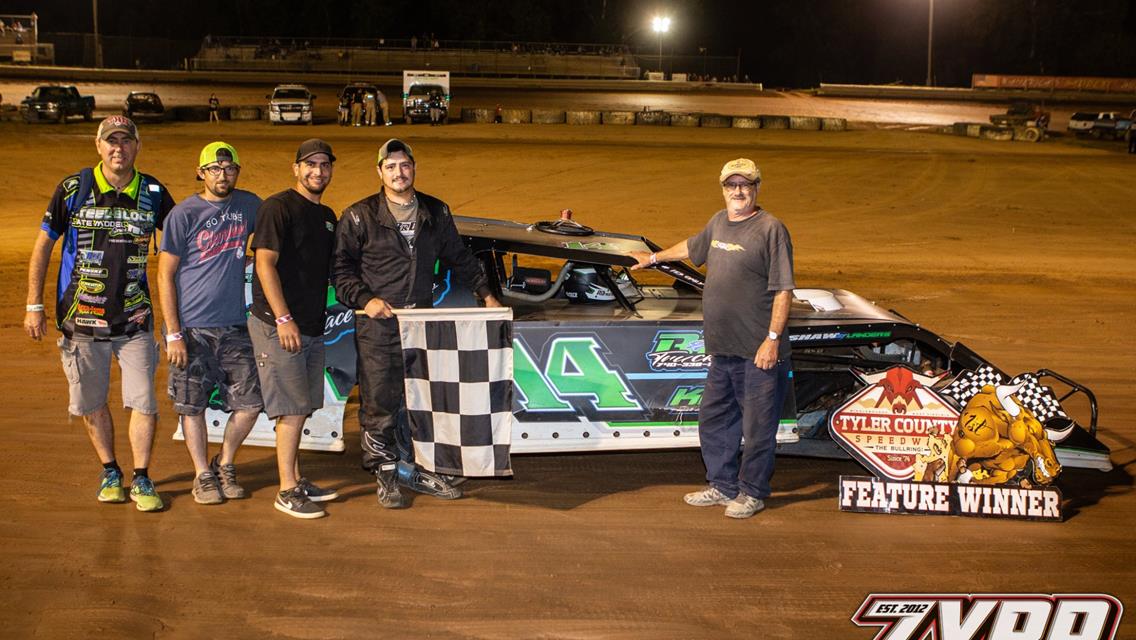 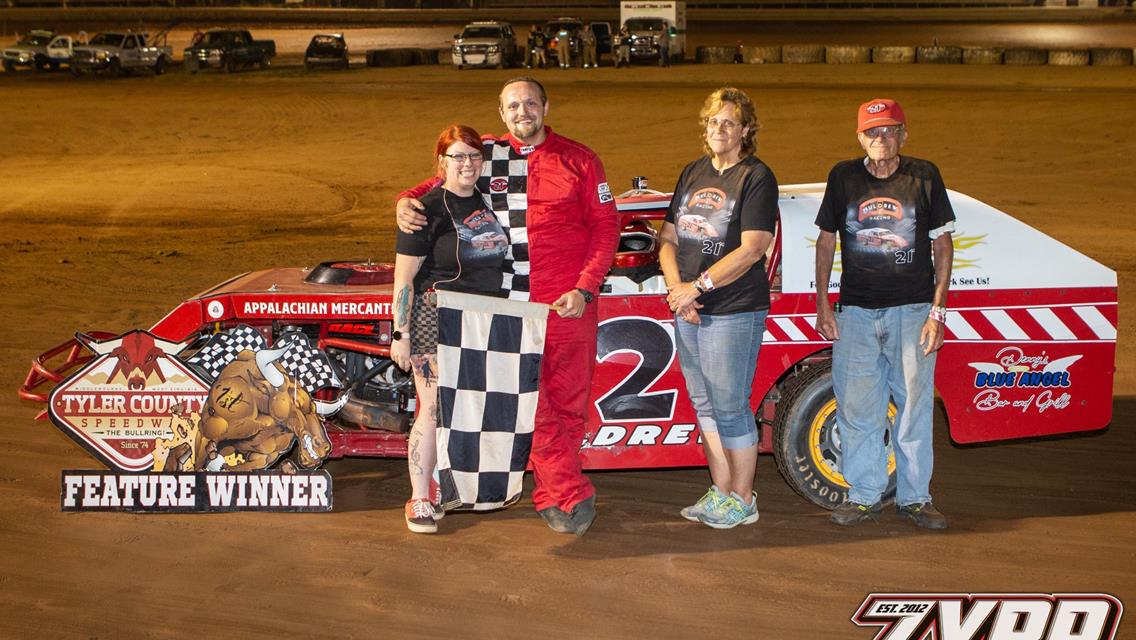 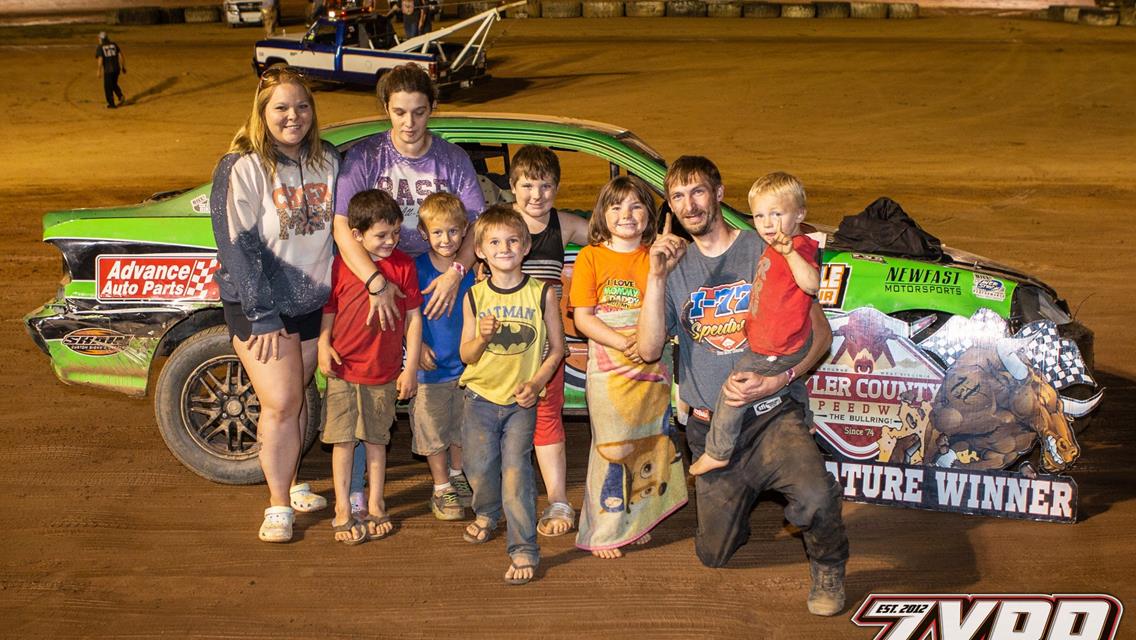 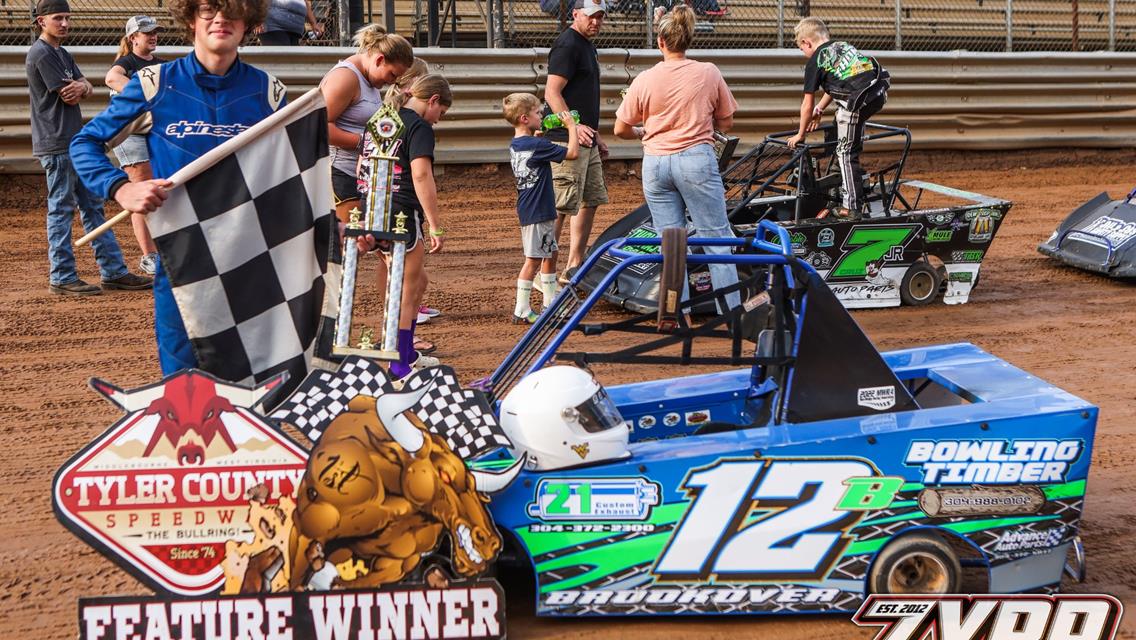 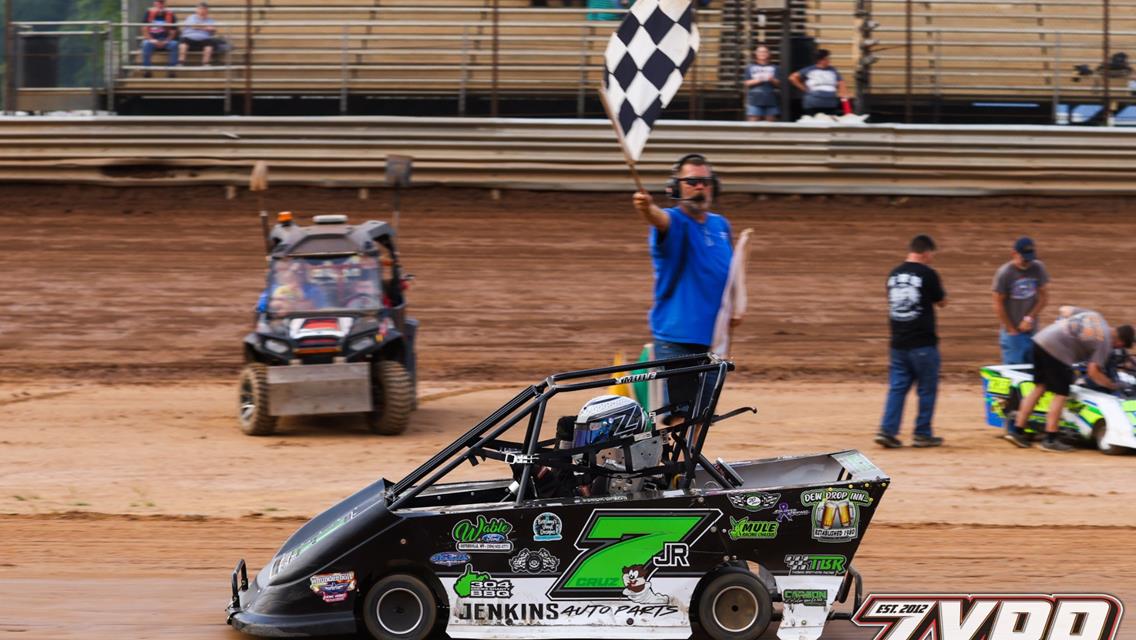 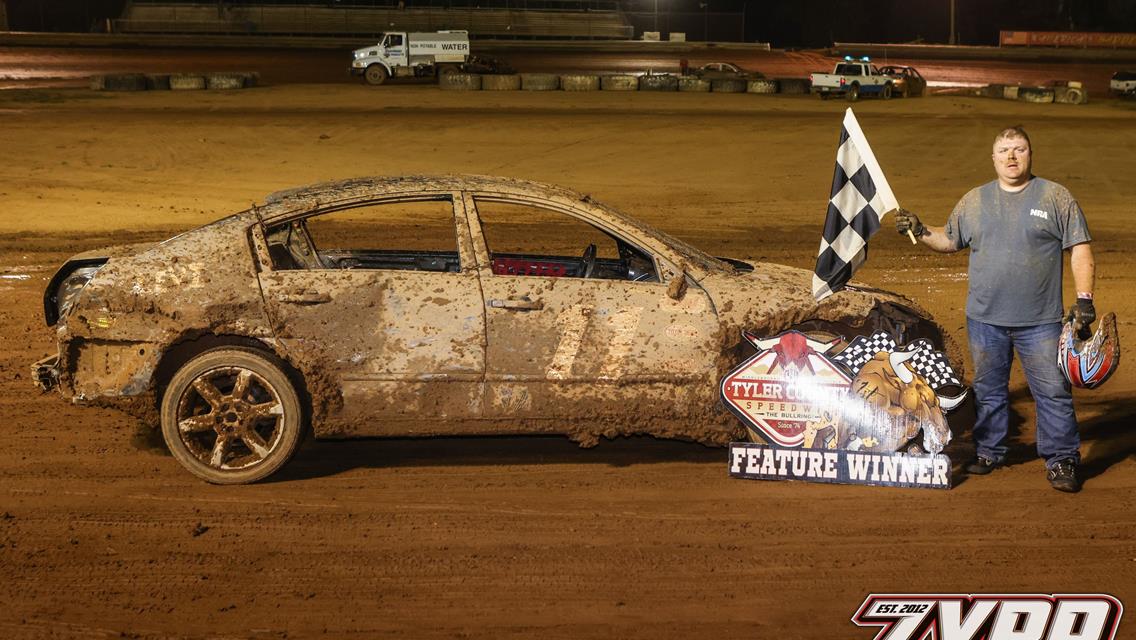