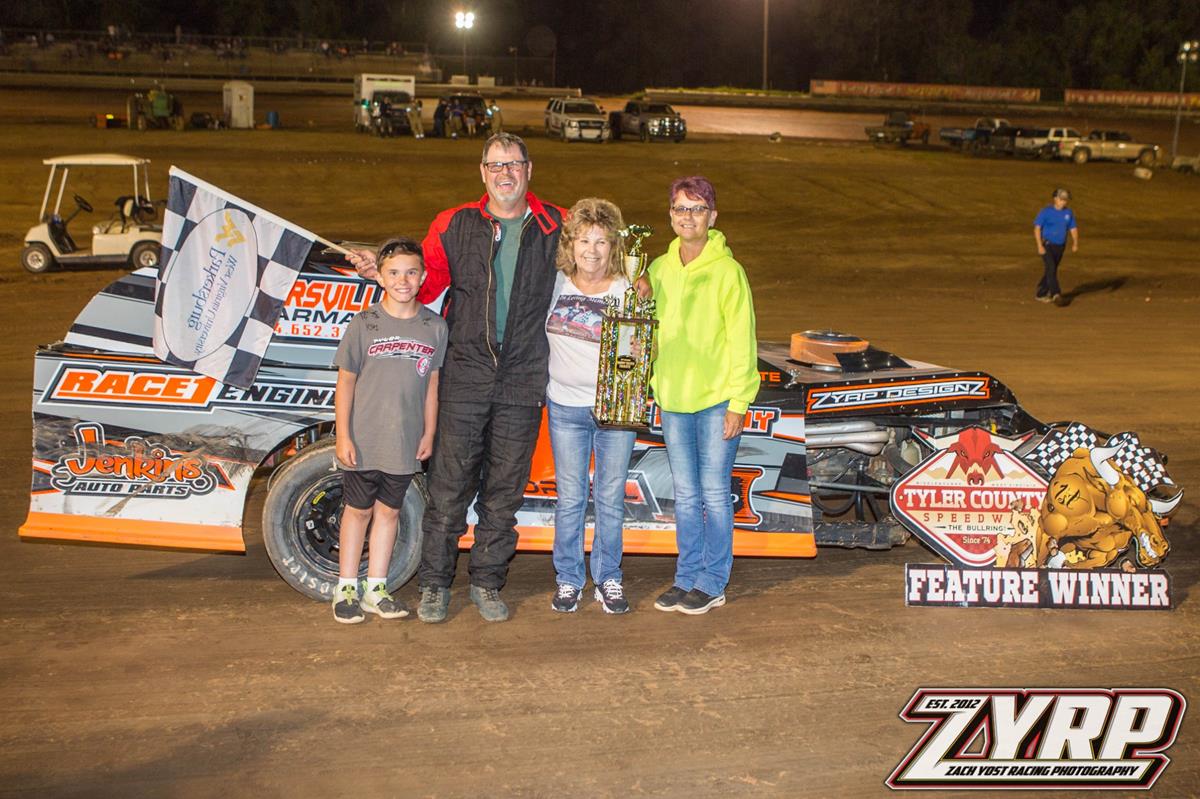 Tyler County Speedway welcomed another great crowd to America’s Baddest Bullring as it played host to its annual ‘Pack the Track’ FREE Night. The best fans in racing were treated to a full slate of side by side racing action including the running of the Tammy Clegg Tribute Race, Joe Dirt Enduro and even an Autograph Night at intermission. Picking up checkered flags and trips to the West Virginia University of Parkersburg Victory Lane were Jeff Gorrell, Shawn Jett, Donnie Dotson, KC Burdette, Kendall Hodge, Kevin Criswell, Cruz Thomas and Peyton Baker.

The Sigler Fabrication EDGE Hotmods would be the main attraction on Saturday Night as the economical division would square off in its annual Tammy Clegg Memorial race. It was Middlebourne, WV’s Jeff Gorrell picking up his first feature win of the season in the competitive class. It would not come easy for the defending track champion as Gorrell would have to hold off a spirited challenge from sentimental favorite Brian Clegg. Clegg racing in honor of his mother would drive the ‘Rooster Nation’ number 2 machine and work the leader high and low in his attempt at the win. But at the checkers it would be Gorrell aboard the RX1 machine leading the pack to the pay window ahead of a game Brian Clegg, Daniel Muldrew, Steve Magyar and Brian Probst.

Nineteen tough Jenkins Auto Parts UMP Modifieds would make their way to the ‘Bullring’ Saturday Night with Parkersburg, WV KC Burdette capturing his second win of the season at Tyler County. A great race throughout the 20 lap affair would see the ‘Southside Flyer’ Kenny Johnson blast into the lead from his front row starting spot. Johnson would drive a smooth race with Burdette settling into the runner-up position glued to the leaders bumper. As Burdette continued to pressure Johnson high and low, the laps began to click away and with just two laps remaining Burdette would make the winning move on the highside exiting turn four in fine fashion to secure the exciting win. Following Burdette across the stripe was Johnson, current point leader Chad Smith, Coleman Evans and Danny Thomas in a stacked field.

Davisville, WV’s Kendall Hodge would turn back the challenges from Pat Garrett early in the race and set his machine on cruise to pick up his 3rd feature win of the season at the ‘Bullring’ in the Middlebourne Galaxy Food Center Sportmod division. Hodge would head to the West Virginia University of Parkersburg Victory Lane in front of Garrett, Steven Dotson, Sonny Leek and Tyler Spencer.

It was ‘hired gun’ Kevin Criswell of Wellsburg, WV filling the seat of the c19 machine normally piloted by Patrick Willbarger picking up his first feature win of the season at Tyler County Speedway in the Dual Threat Sports Cards SCDRA 4 Cylinder Feature. A healthy 18 car field would take the green with Criswell poised and at the point, the driver of the Vannest Performance/ Cottageville Engine/ Newfast Motorsports Honda would run a smooth race enroute to the victory ahead of the Father/Son duo of Joe and Joey Price, Nick Ley and Mason Wolfe.

The rescheduled Joe Dirt Enduro Race would bring the evening to a close with Dalton America picking up the hard fought win over Bobby Boggs, Chad Rexroad, Jeff Swiger and Jim Rhodes.

Kicking off the jam packed evening was the youngsters of the Mini Wedge division. In the Junior class it was 3rd generation racer Cruz Thomas grabbing his fifth feature win of the season over Eli Smith and Arianna Henthorn. In the Senior division it was Peyton Baker snaring back to back Tammy Clegg Tribute victories ahead of Erickson Smith and Wyatt Demoss.

Be sure to join us at Tyler County Speedway for a rare Friday Night race next week. America’s Baddest Bullring presents a ‘Flat Out’ Friday Night show on June 17th as a full program of Super Lates, RUSH Lates, UMP Modifieds, Sportmods, Hotmods, 4 Cylinders and Mini Wedges will kickoff your weekend plans. Tyler County Speedway will be closed on Saturday, June 18th for the big OSTPA Truck and Tractor Pull at Ohio Valley Speedway. Be sure to make plans to attend the Saturday Night, June 25th ‘Kings of Karnage’ Monster Truck Show featuring high flying car crushing action, meet and greet, demo derby, racing and much more! 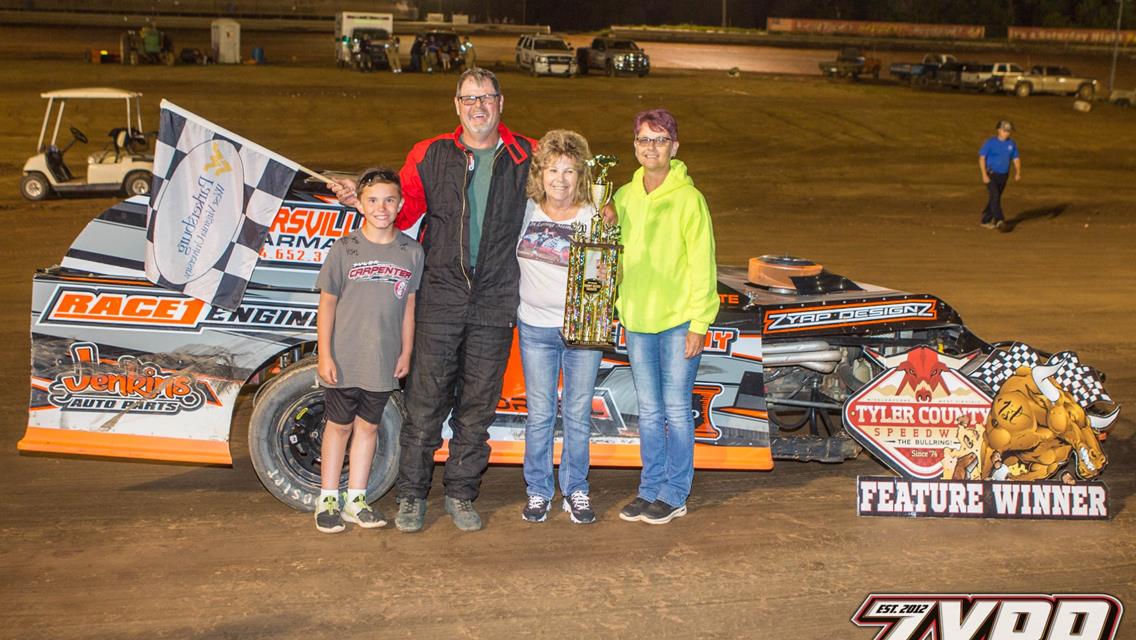 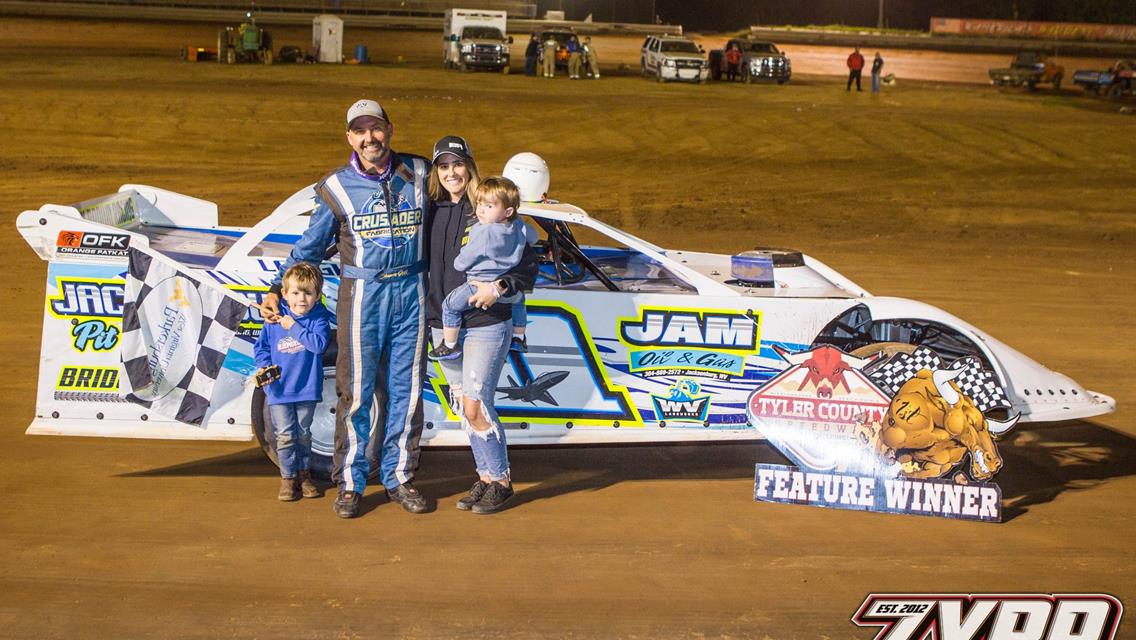 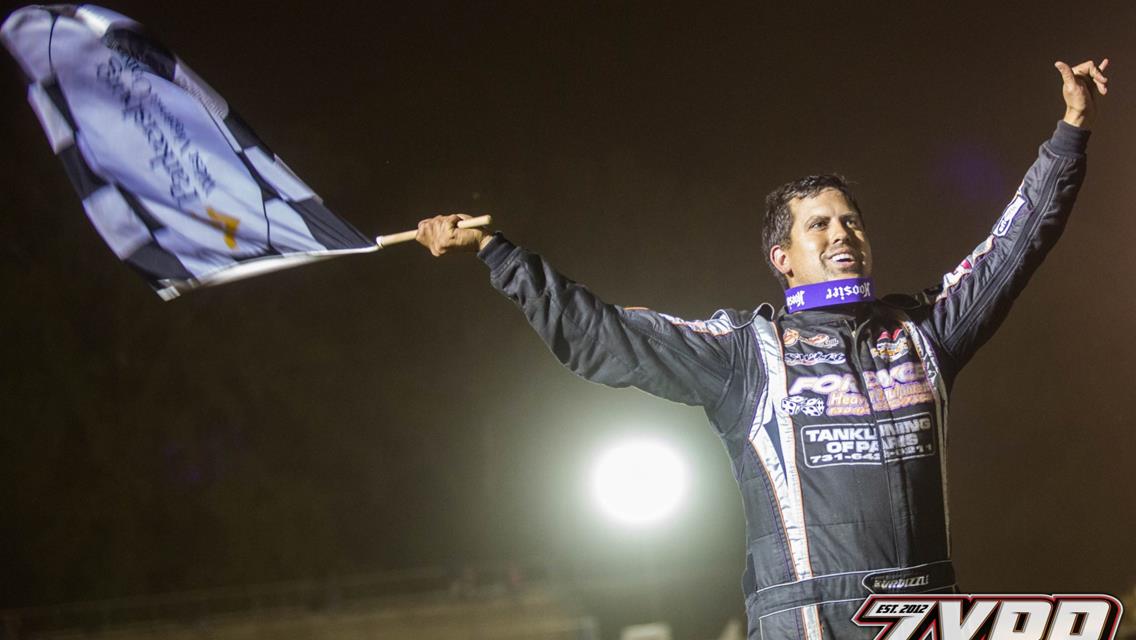 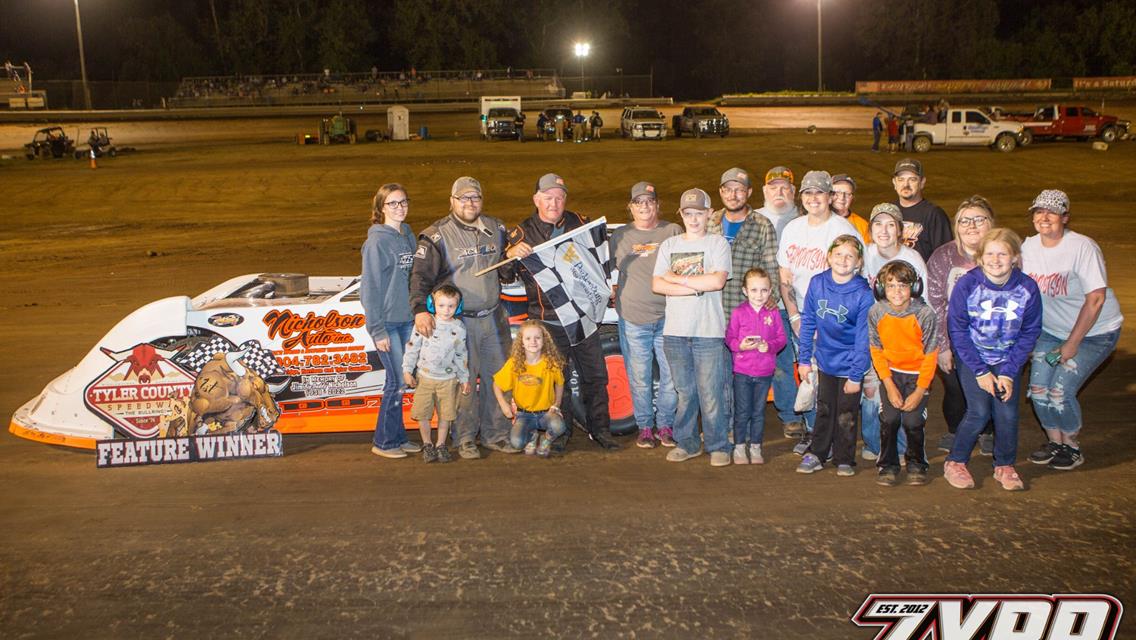 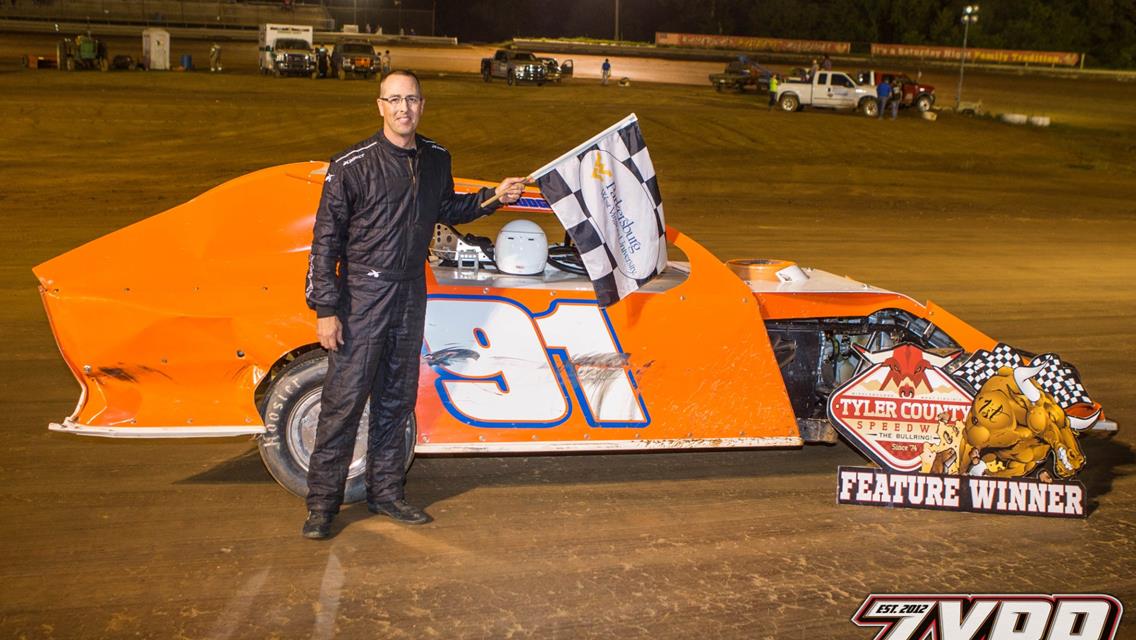 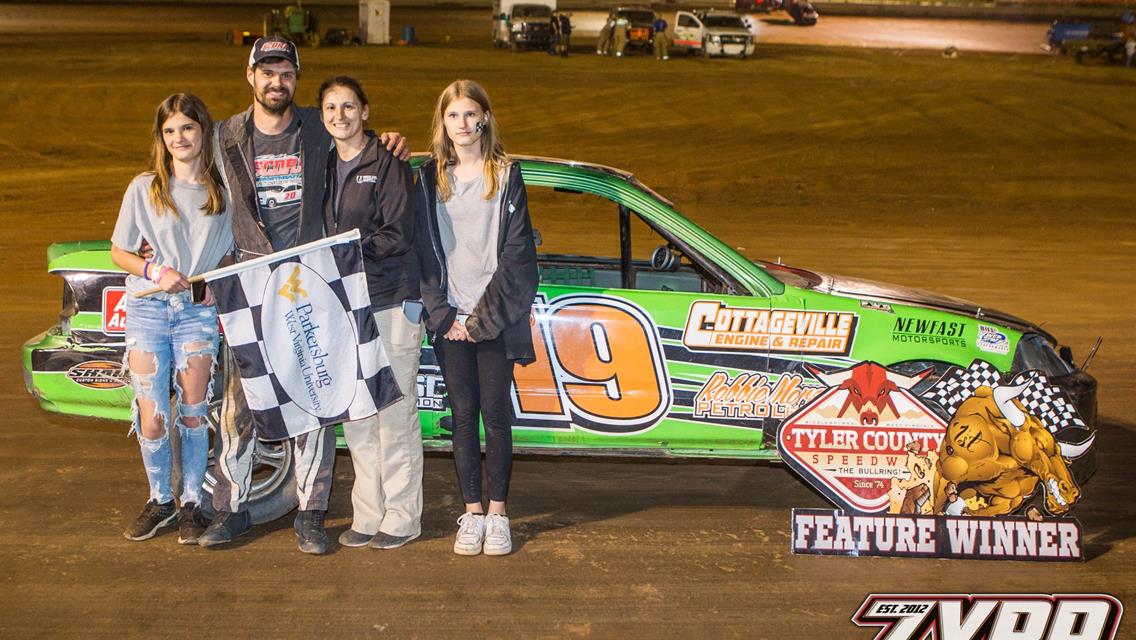 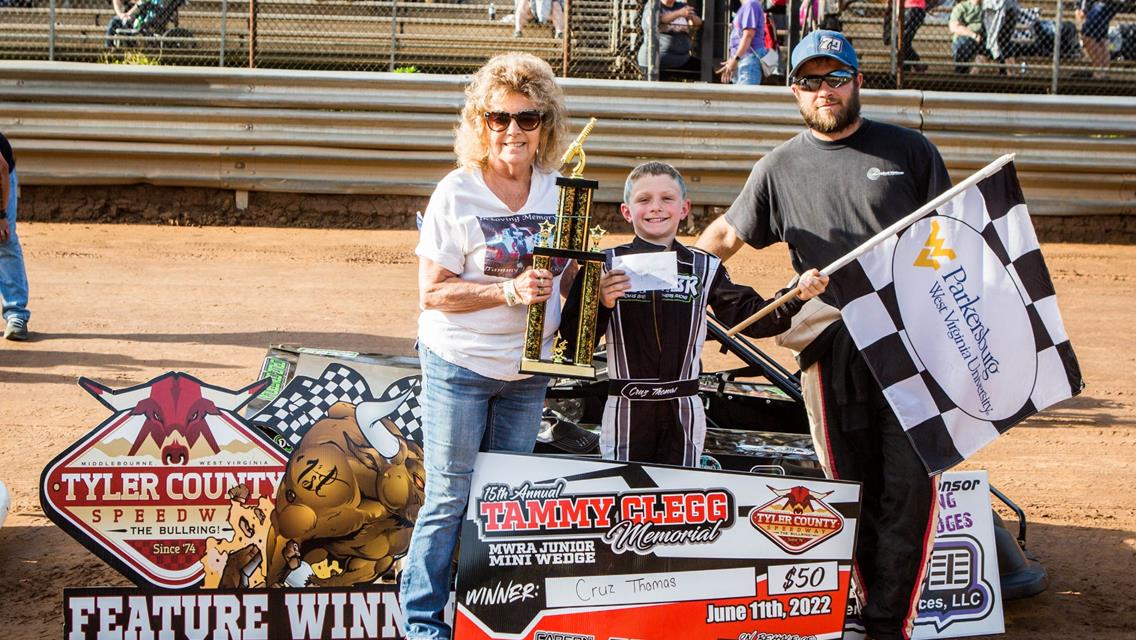 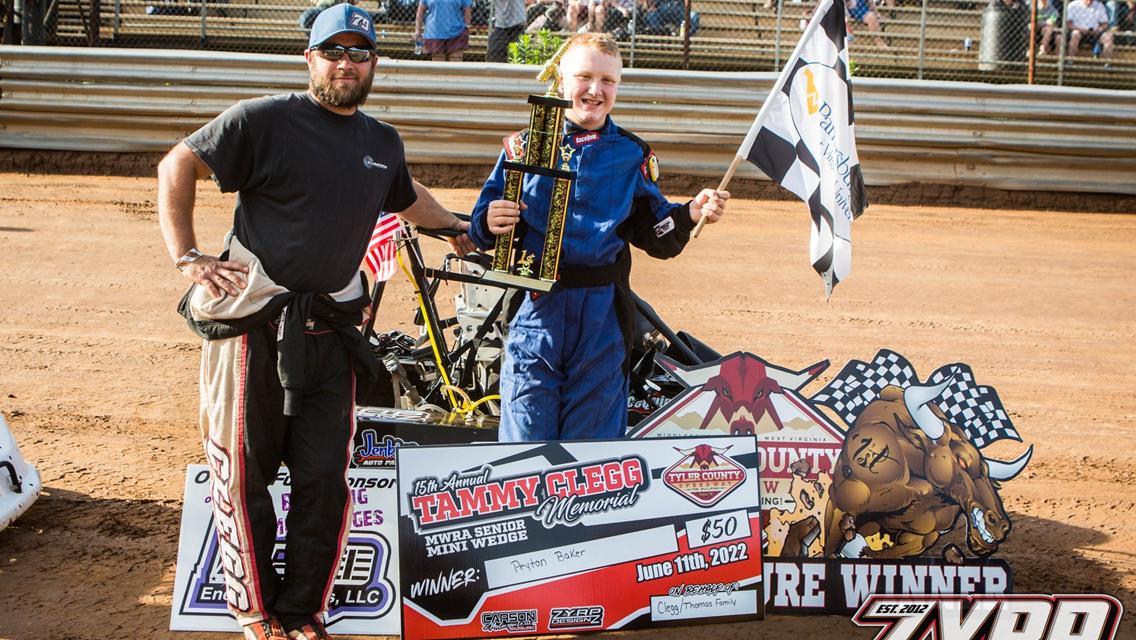 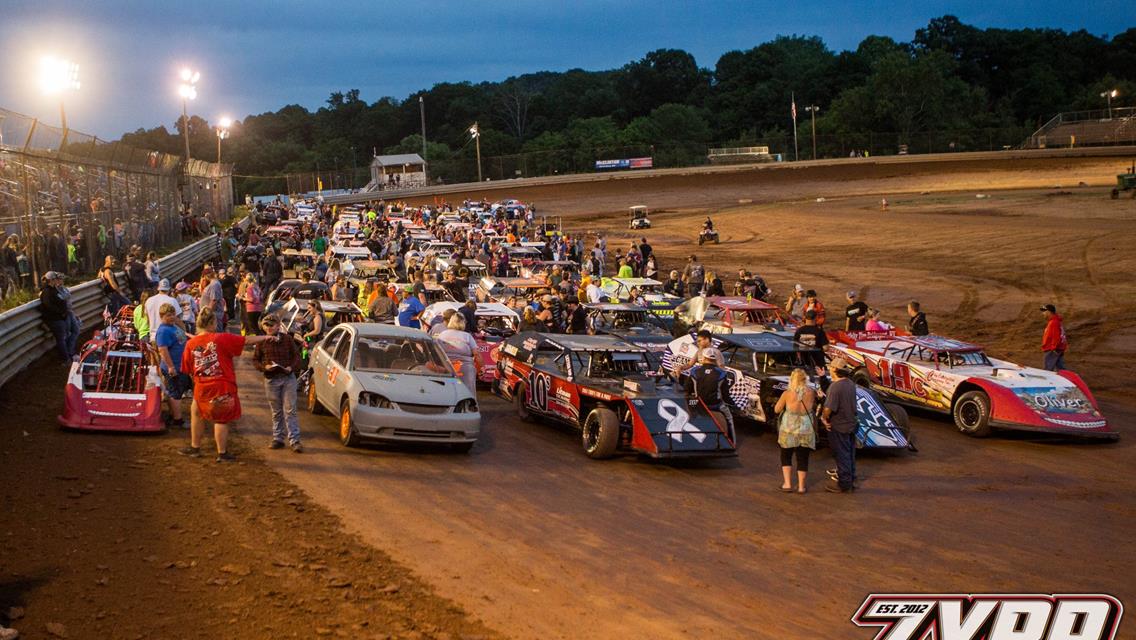