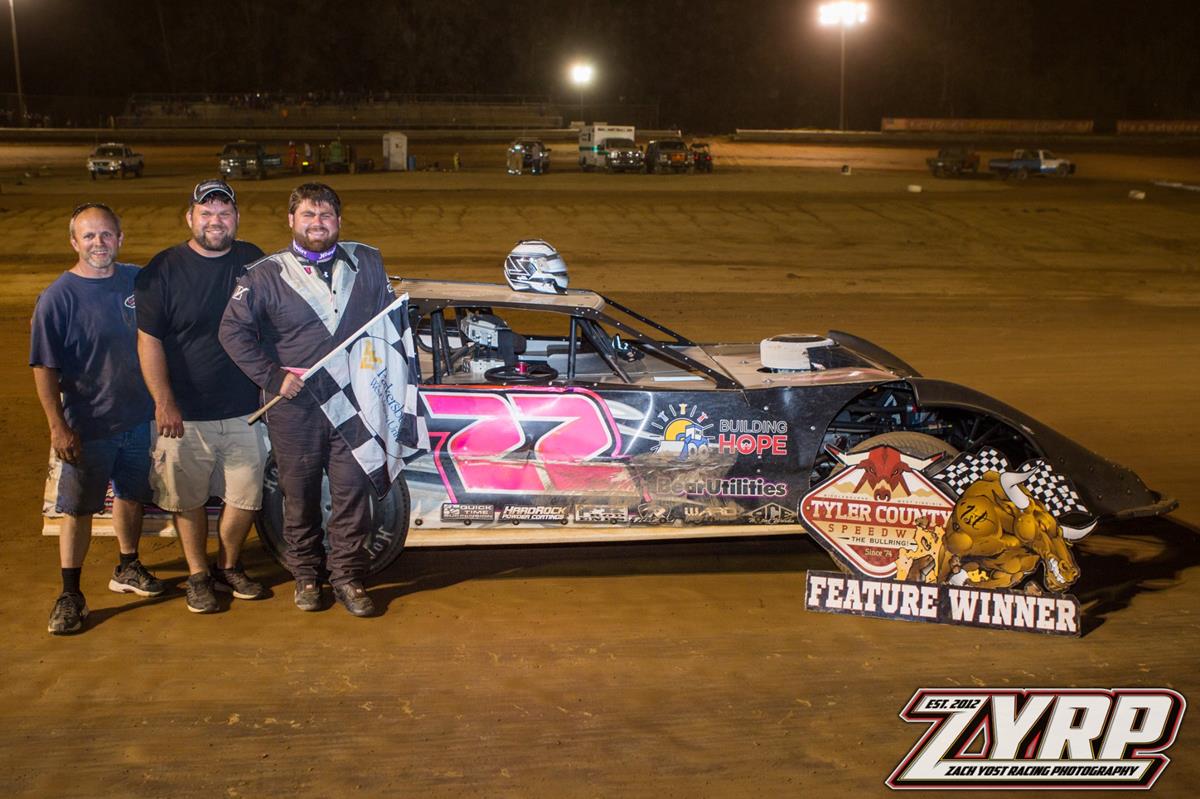 A tremendous McClinton Chevrolet Mitsubishi RUSH Late Model main event would see Shinnston, WV’s AJ Spagnuolo grab his first win of the season in dramatic fashion. The driver of the American Garage Door LLC/ A1 Lawn Care/ Spagg Racing Rocket XR 1 would settle into the runner up spot for the early duration with previous multi time feature winner Michael Duritsky at the point setting a torrid pace. Duritsky would seem poised to pick up another feature win but as the race entered its late stages Spagnuolo would begin to reel the leader in and with just a couple of laps remaining the lead duo was on lap traffic. As the white flag waived it was anyones race as Duritsky and Spagnuolo went side by side thru three and four slicing and dicing lapped traffic with Spagnuolo stealing the win away on the last lap. Following Spagnuolo and Duritsky across the line were Donnie Dotson, Logan Reed and Lucas McDonald.

A stacked field of 24 high quality Jenkins Auto Parts UMP Modifieds presented by J&R Excavating would take the green flag with JP Roberts busting out of the gates and into the early lead. KC Burdette would drop back to the 3rd position before starting his rally back to the front dispatching of Chad Smith and JP Roberts to take the lead. Once out front the Parkersburg, WV driver would drive off to secure his first win of the season at the Bullring. Following Burdette to the pay window was Chad Smith, JP Roberts, Kenny Johnson and Travis Dickson.

The season of Probst domination in the Sigler Fabrication EDGE Hotmods continued as Brian Probst would score the feature event and his 3rd of the season over the 20 car field. Probst was followed by Steve Magyar, Tom Sigler, Eddie Probst and Josh Sigler.

The youngsters of the Mini Wedge Association would kick the evening off with Cruz Thomas notching his 4th trip to the West Virginia University of Parkersburg Victory Lane. Thomas held off Josh Baldwin and Arianna Henthorn for the victory. It was newcomer Gunner Binns getting the win in the Senior Mini Wedge division ahead of Jake Casto and Erickson Smith.

Join us next Saturday Night, May 21st as the Tyler County Speedway presents ‘School’s Out’ Kids Little League Night as all kids in uniform get a FREE Hot Dog and featuring Face Painting/ Gold Rush at intermission! Plus the Youth League of Auto Racing compete in the Mini Wedge National Championship presented by West Virginia University of Parkersburg, the $700 to win Mid-Ohio Valley FWD Championship presented by Sycamore Home Inspection, LLC and the rescheduled ‘Joe Dirt’ Enduro Race. 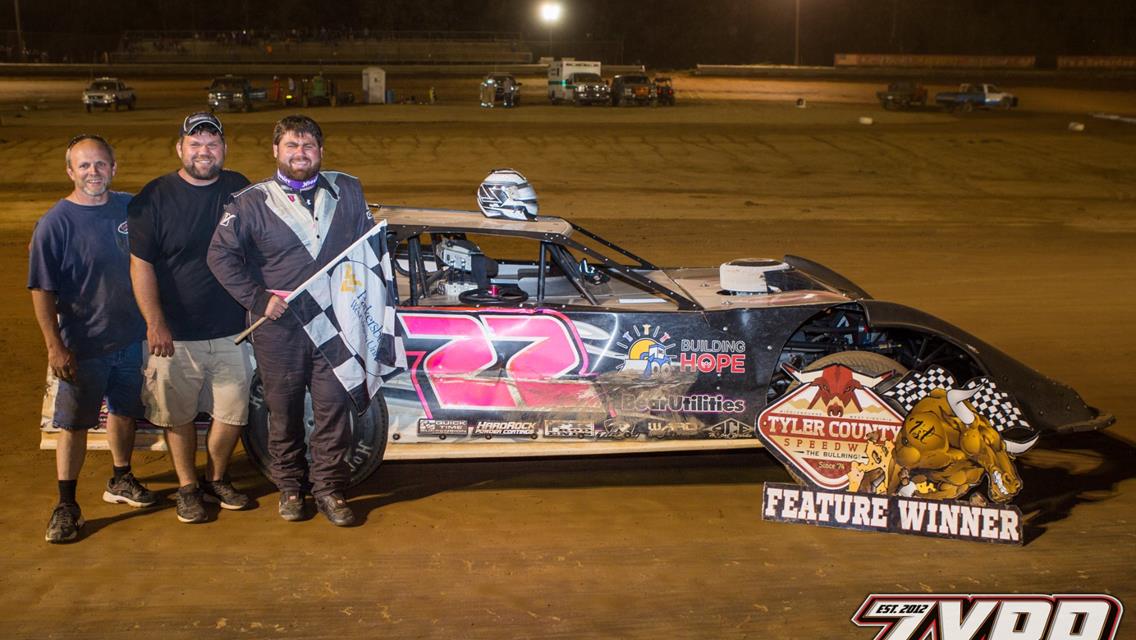 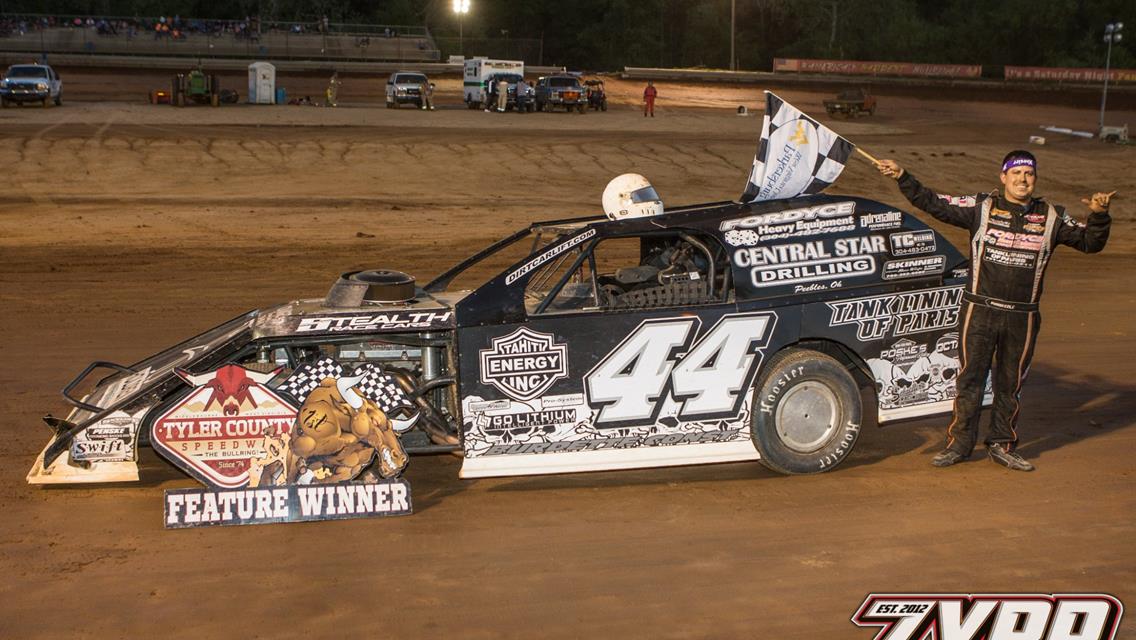 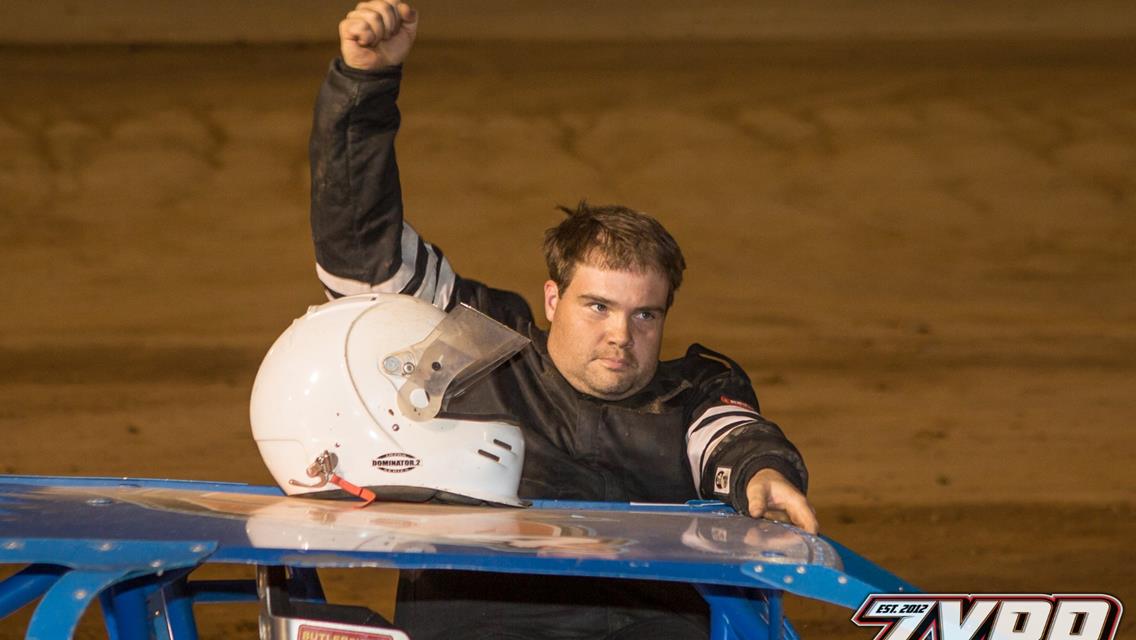 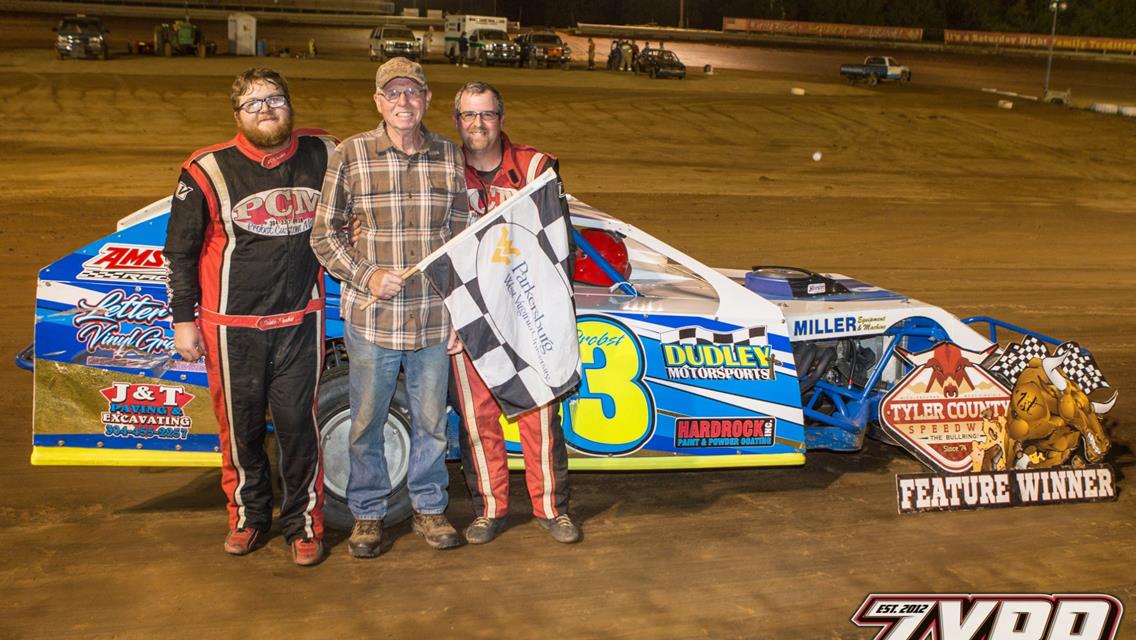 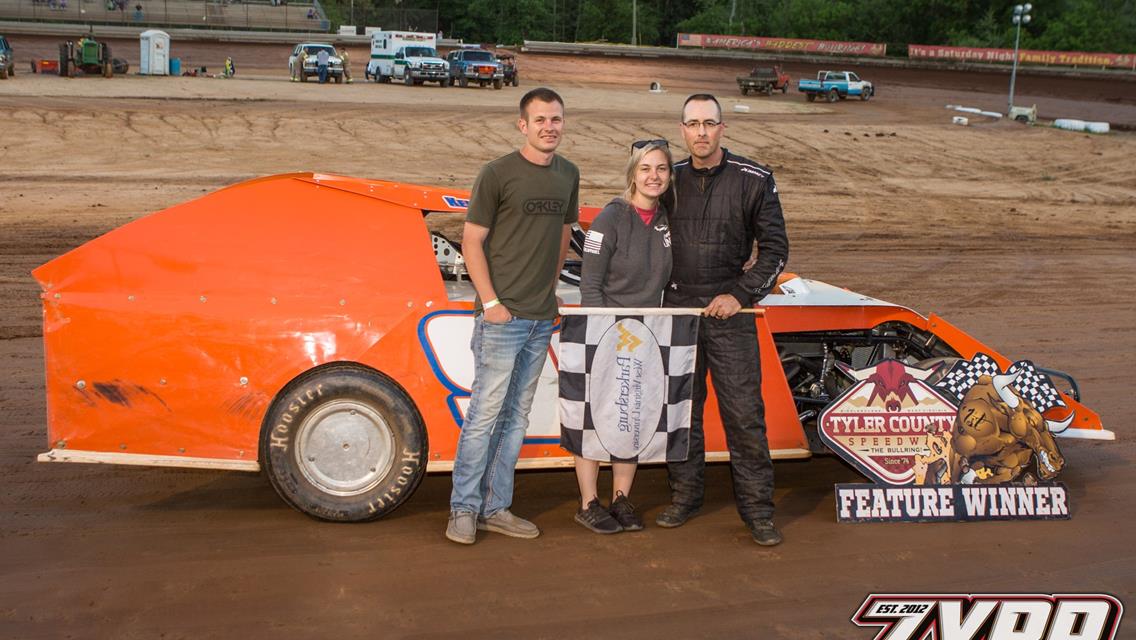 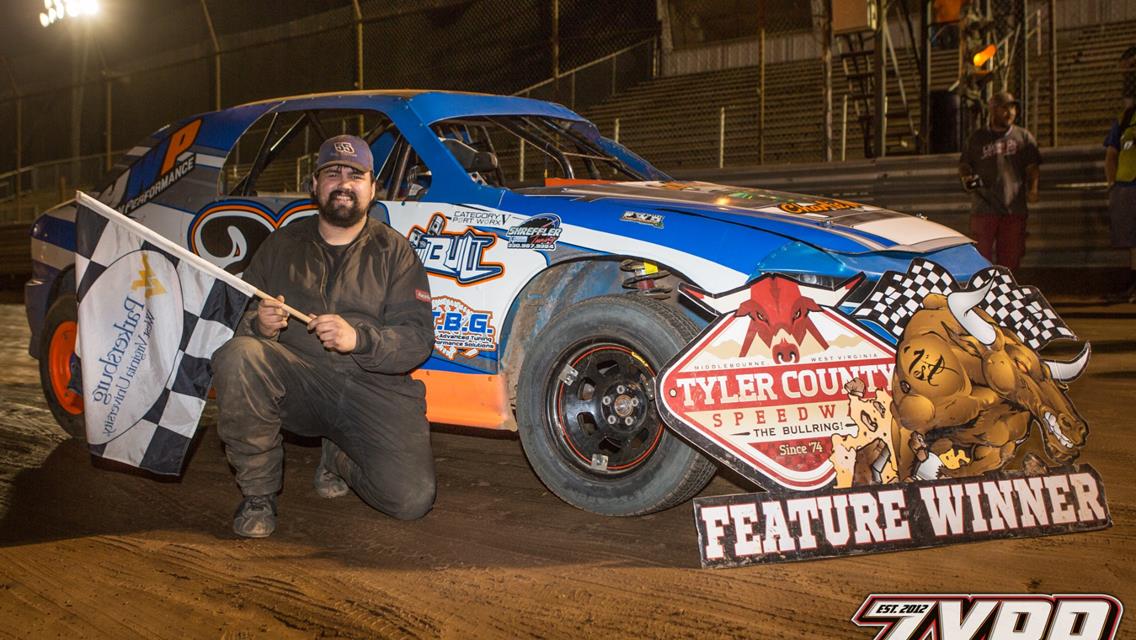 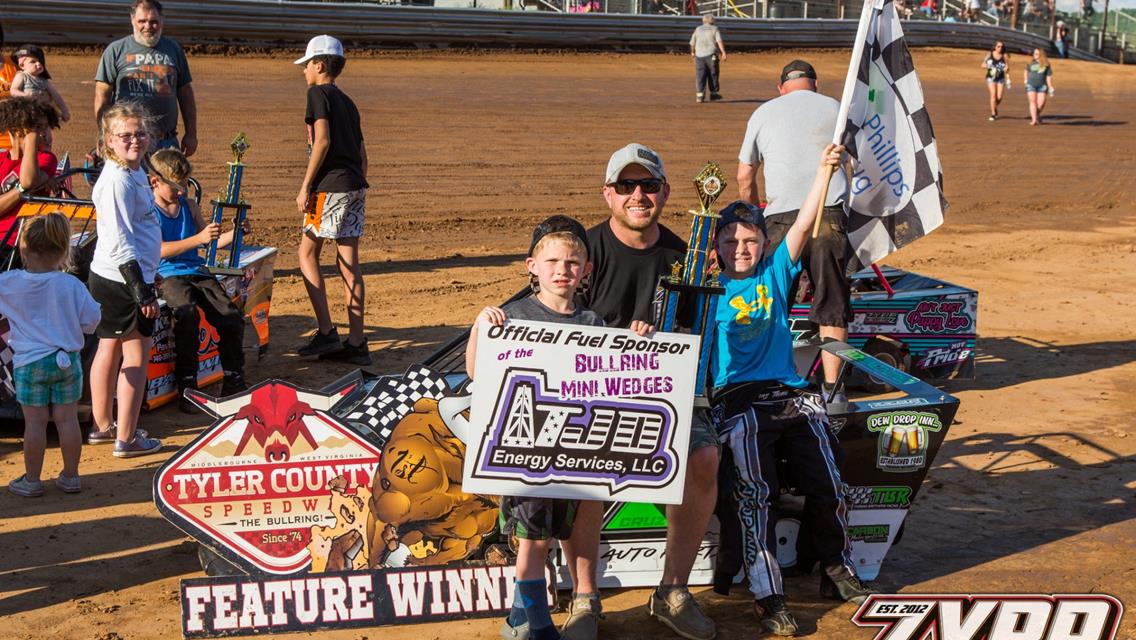 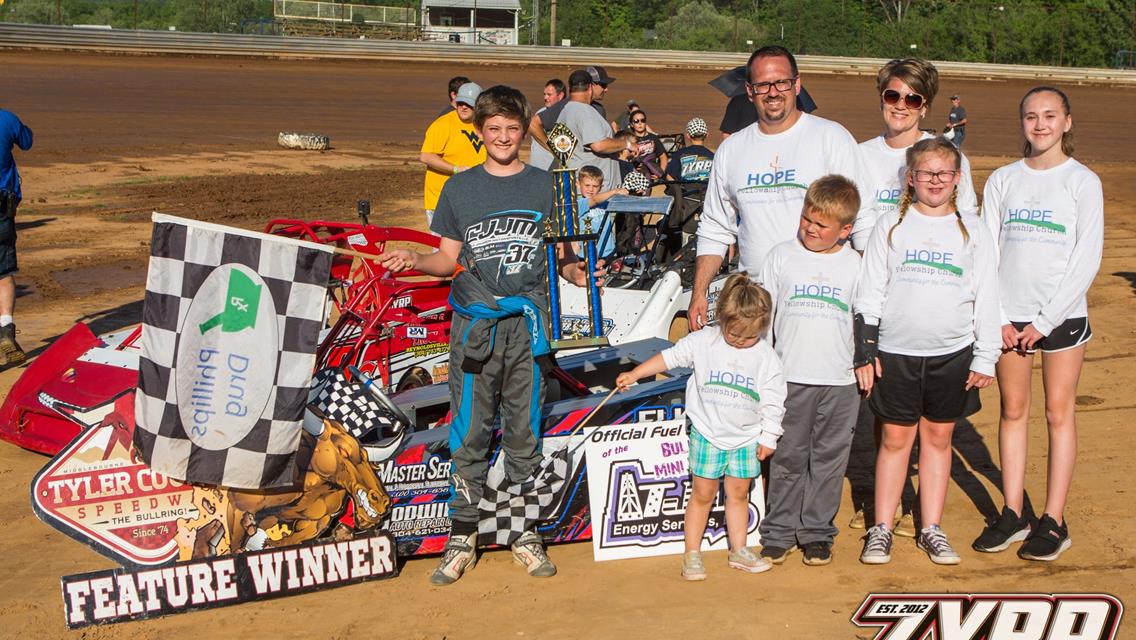