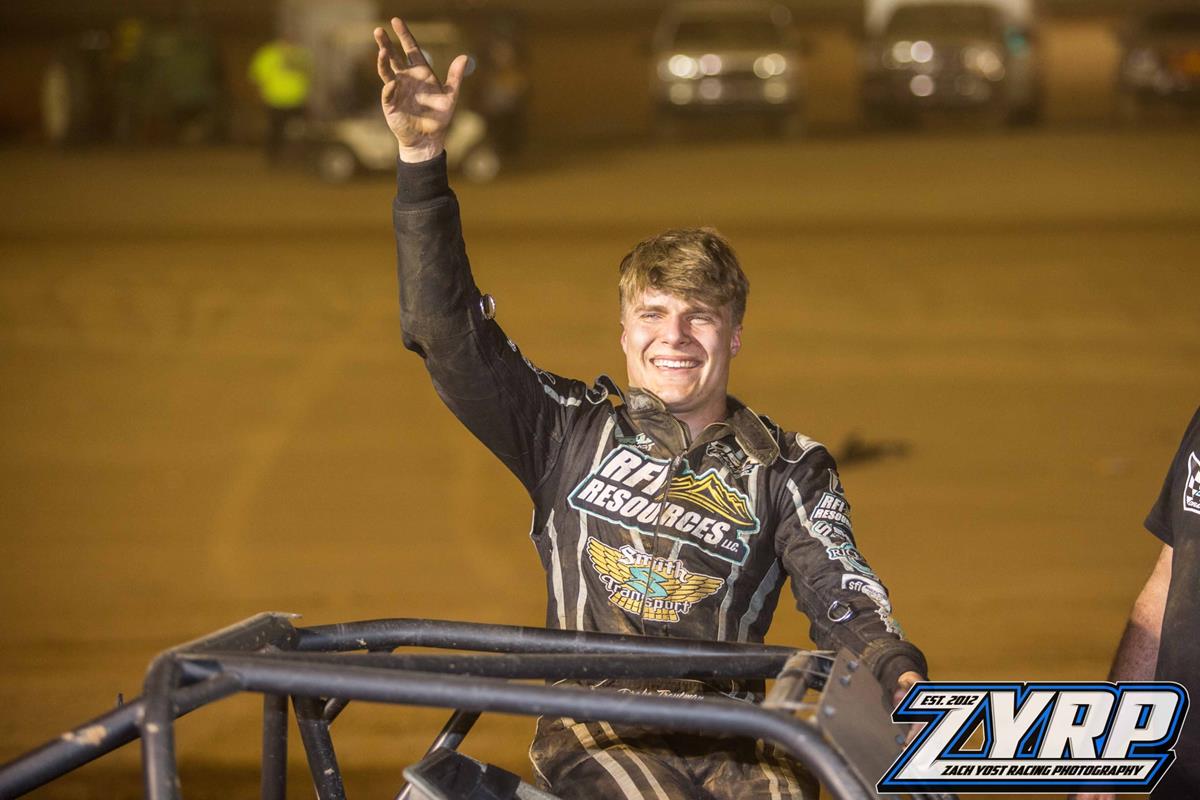 The Tyler County Speedway played host once again to the 2nd oldest dirt late model topless event in the country with the 28th edition of the Topless 50. It once again certainly lived up to the hype as the ‘Topless 50’ continues to morph into one of the must see events on the race calendar. The fan favorite event over the years has featured last lap passes, career defining wins and is always filled with storylines galore and the 28th running certainly added to the legacy of the premier event. An excellent race that would see Hyndman, Pennsylvania’s Drake ‘The Kid’ Troutman, a mere teenager who seems destined for the bright lights of the sport score his biggest career Super Late Model feature win and add his name to Topless 50 lore. It would not come easy as multi-time track champion Kyle Thomas would vault off the front row setting a blistering pace with Jacob Hawkins, Tim Dohm and Troutman in tow. Troutman would make an excellent move to jump into the runner-up position and would proceed to hound Thomas for the race majority. As the duo would begin to work lap traffic a clear high line would emerge for the Pennsylvania hotshoe as Troutman was pounding the highside while Thomas worked the bottom. A great battle between the talented shoes would see Troutman make the winning pass with 9 laps to go in front of an appreciative and packed grandstands. ‘The Kid’ would head to the pay window $5,000 richer for his efforts aboard the Smith Transport/ RFI Resources/ Wheeler Fleet Solutions/ Shoe’s Diesel/ Lasalle Racing Engines/ D&R Trucking/ Shaffer Construction MB Customs black #7 machine. Following Troutman to the West Virginia University of Parkersburg Victory Lane with podium finishes was Fairmont’s Jacob Hawkins and Pennsboro’s Kyle Thomas with Derek Doll and Tim Dohm rounding out the top five.

In the McClinton Chevrolet Mitsubishi RUSH Late Model division it would be Masontown, Pennsylvania’s Michael Duritsky finding a new home in the Mountain State and the West Virginia University of Parkersburg Victory Lane in particular. Duritsky would park it for the second time in 2022 aboard the Mike’s Auto Repair owned Economy Furnace/ NAPA/ Valvoline/ Peck’s Auto Repair/ Kelly Construction Rocket XR 1 ahead of Donnie Dotson, AJ Spagnuola, an exciting Hayden Jacobs on the highside and Luke Hyre.

The Probst/Dudley race team are on a tear at the ‘Bullring’ as the Father/Son team of Brian and Eddie Probst have picked up 3 of 4 events so far in the Sigler Fabrication EDGE Hotmod division. This week in a showing of ‘father knows best’ it was Brian following up son Eddie’s feature win of a week ago with his second trip to victory lane this season. Probst pilots the Jim Dudley owned Dudley Motorsports/ Letter RIP Vinyl Graphics/ Hardrock Powder Coating/ J&T Paving lightning chassis and was followed across the line by Daniel Muldrew, Eddie Probst, Tom Sigler and Jeff Gorrell.

It was another trip to the West Virginia University of Parkersburg Victory Lane by Jacob McDaniels as the Belpre, Ohio driver would garner the Dual Threat Sports Card SCDRA 4 Cylinder A Main. McDaniels would check out and win his 3rd of the season at the ‘Bullring’ ahead of Joey Price, Joe Price, Mitch Eddy and Timothy Harlan.

In the Mini Wedge division it was Bryson Long nabbing his first win at Tyler County Speedway in the Junior division over Josh Baldwin and Kyndi Glover. The Senior division would see Blake Tasker score the feature win ahead of Jake Casto and Wyatt Demoss.

Be sure to join us again next Saturday Night, May 7th as we celebrate Mother’s Day at the ‘Bullring’. It will be a ‘SaturDate’ Night as you’ll want to bring a date as all ladies get in for ½ price. Plus it’s the Dual Threat Sports Card $700 to win Mid-Ohio Valley FWD Championship presented by Sycamore Home Inspection, LLC plus regular racing in all other classes. 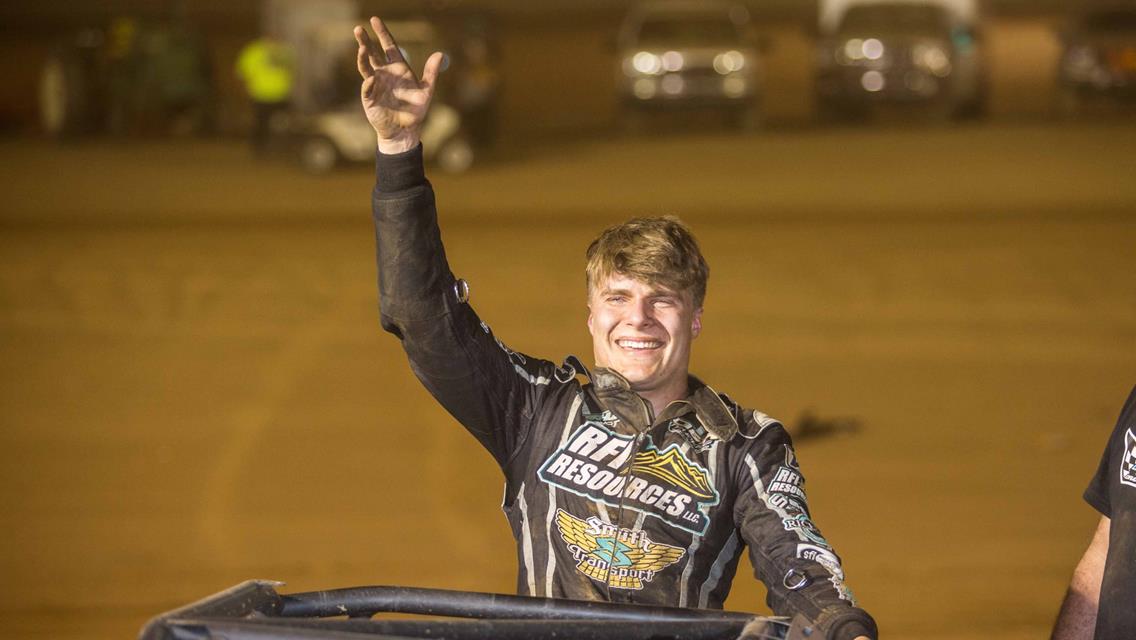 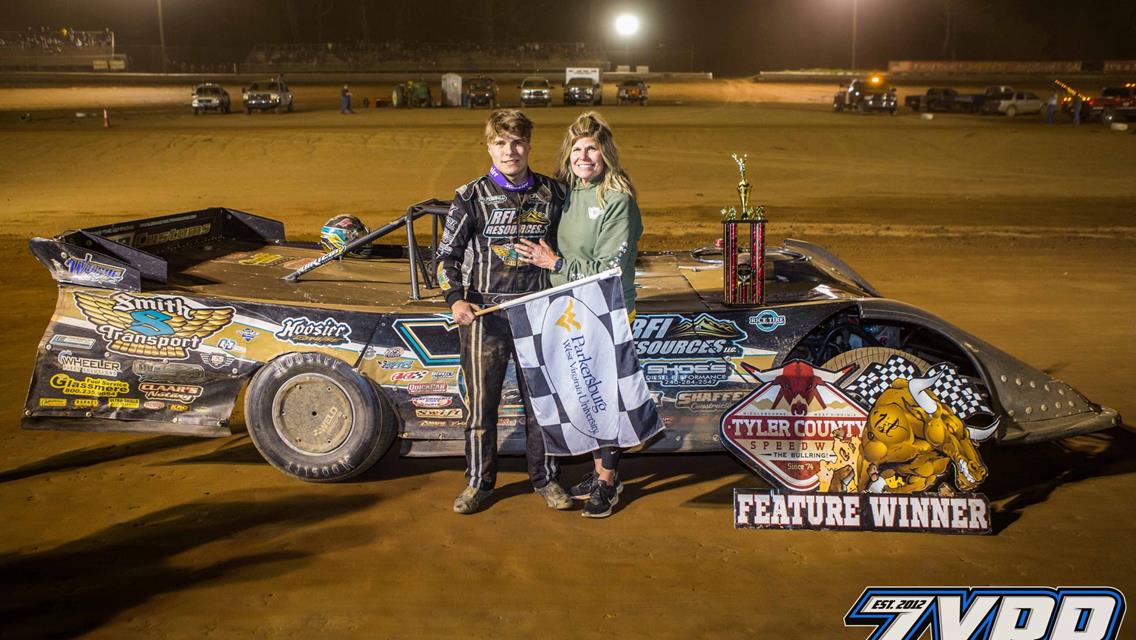 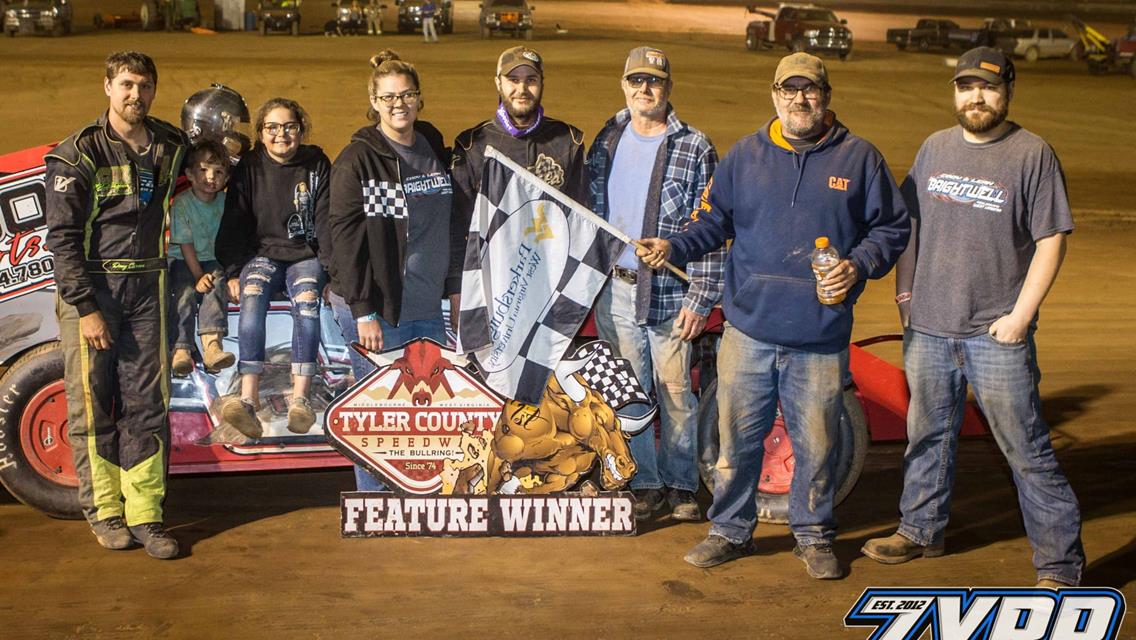 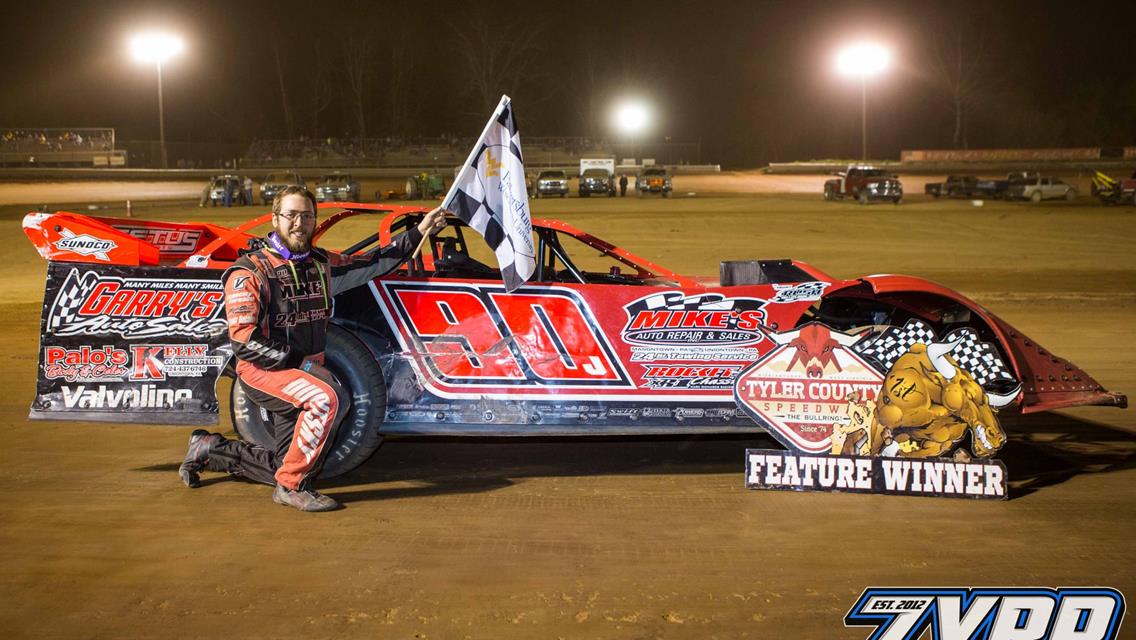 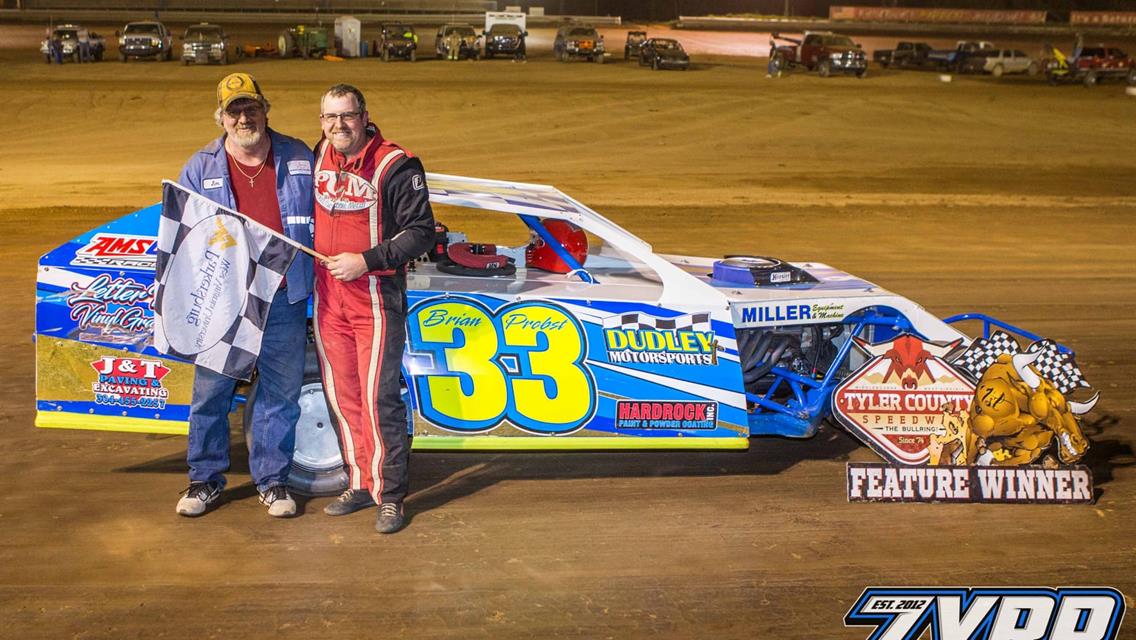 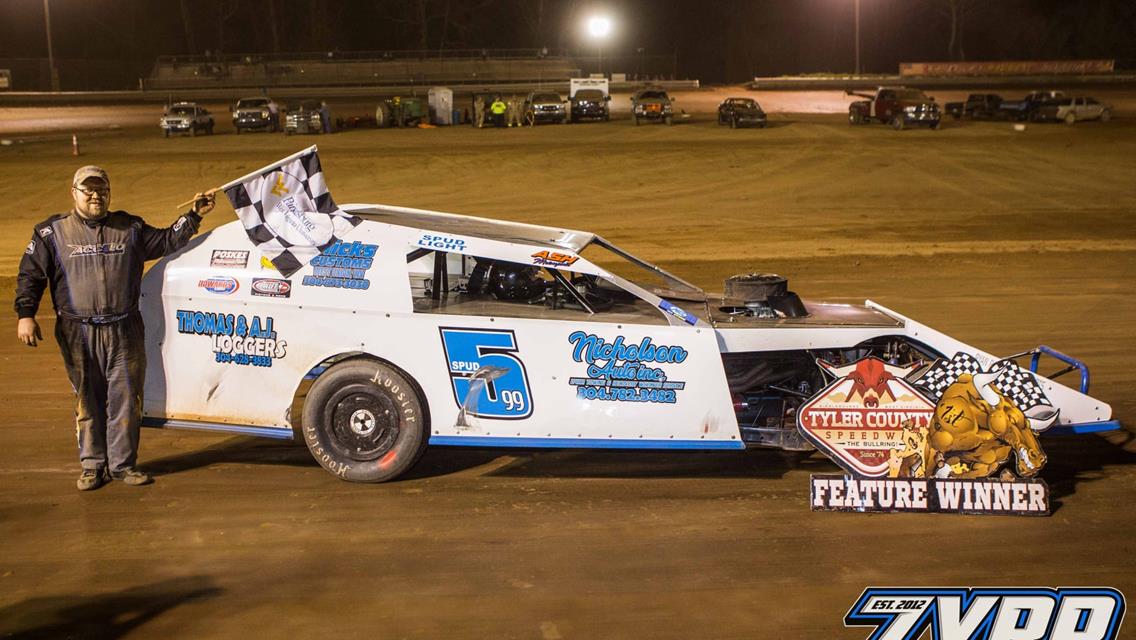 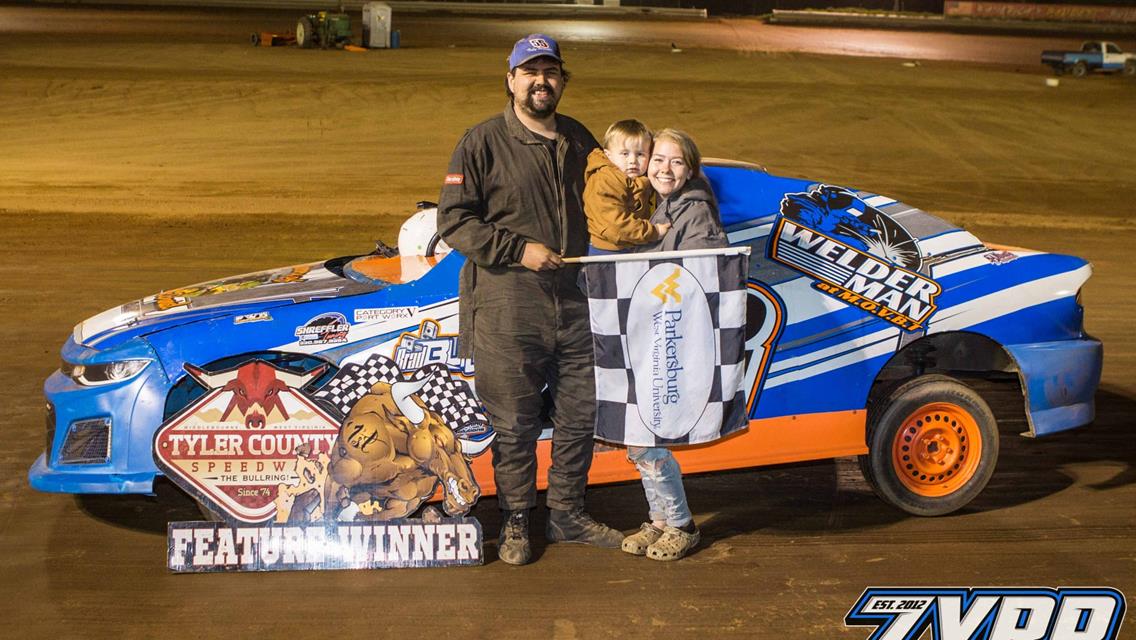 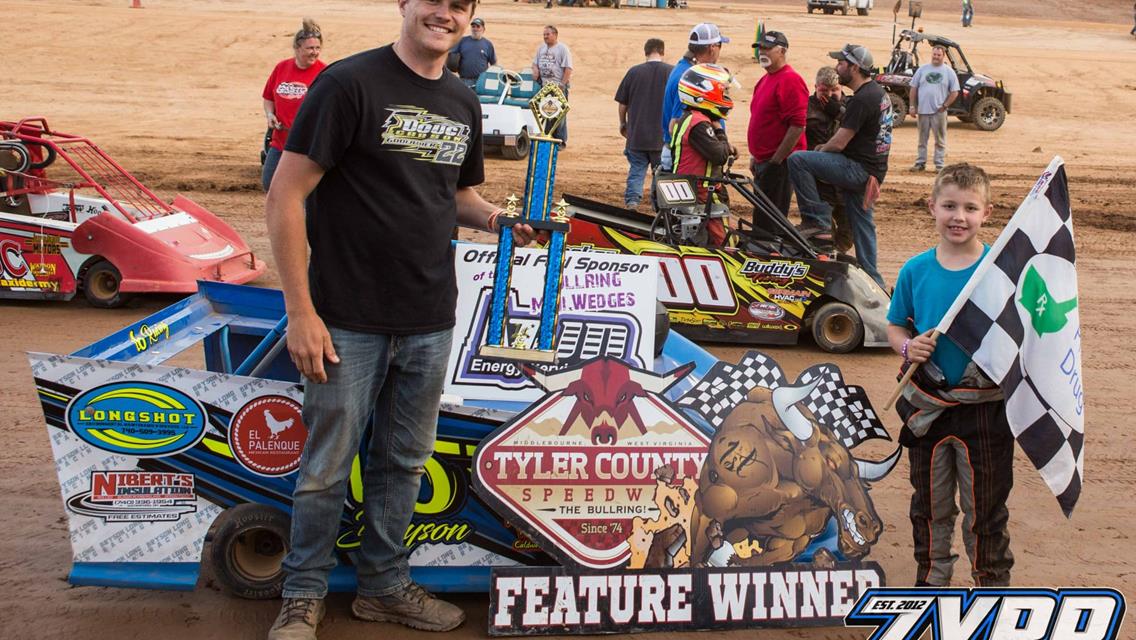 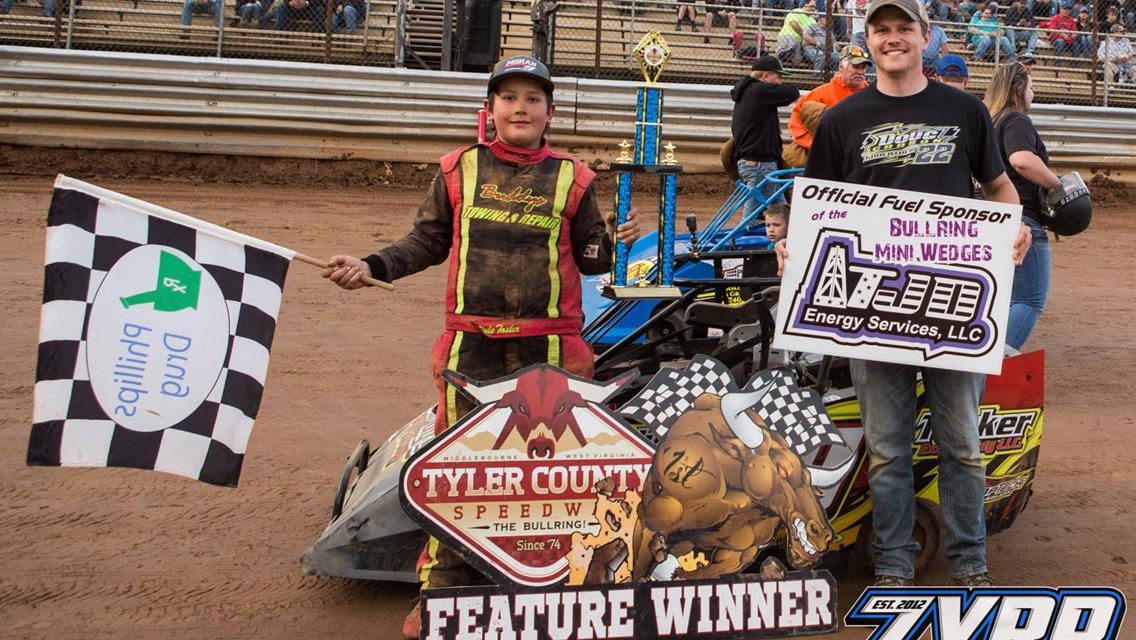