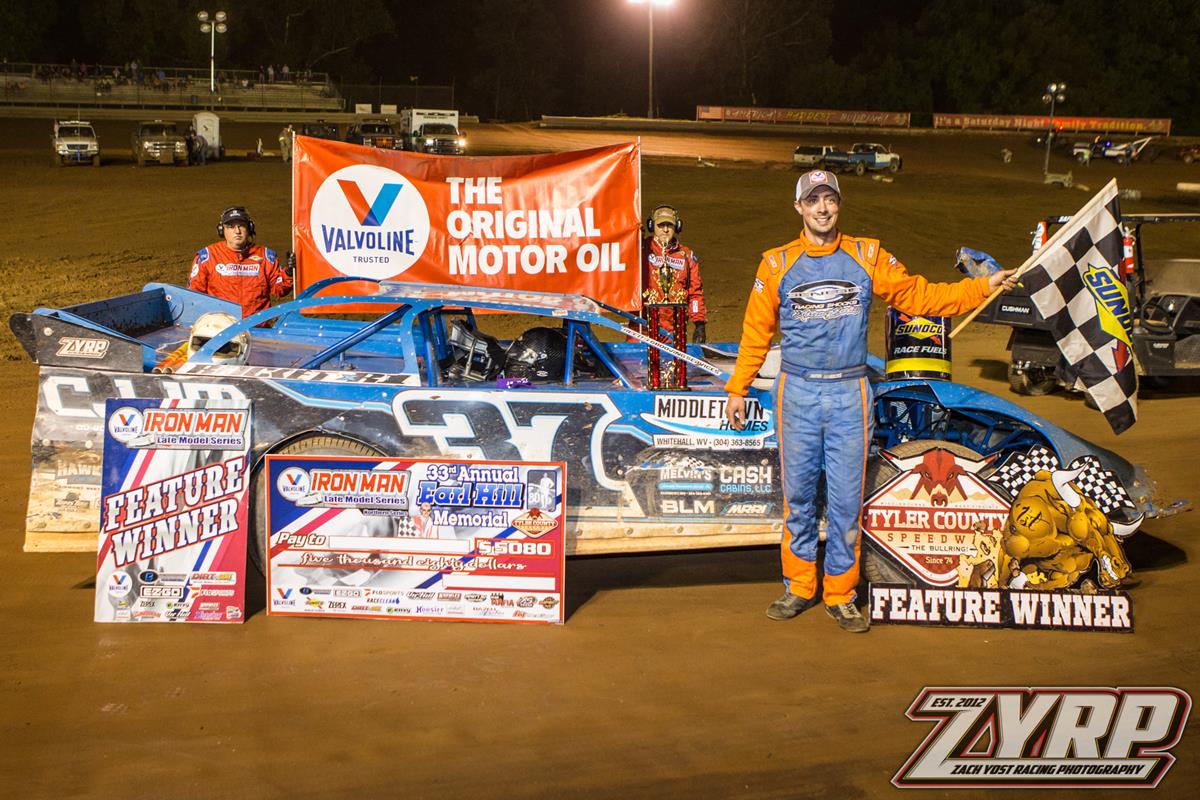 (Middlebourne, WV) The racing ‘Gods’ or in this case Earl Hill was looking down on the Tyler County Speedway Saturday Night as the ‘Bullring’ would beat the odds of Mother Nature to present the 33rd Annual Earl Hill Memorial. With heavy rain around the entire area all day Saturday, the Tyler County Speedway would remain dry all the way up until the first hot lap session would hit the track. A brief rain shower would delay the start of the show but a persistent crew would push on to present the annual tribute race in Memory of Earl Hill. Picking up wins were Jacob Hawkins, Daniel Hill, Kyle Thomas, Cruz Vandall, Tom Sigler, Timothy Harlan Jr., Leah Brightwell and Jake Casto.

The 33rd Annual Earl Hill Memorial would roll off first as the Valvoline Iron Man Late Model Series would make their first appearance at Tyler County Speedway. Twenty six tough late models would sign in with four heat races being ran with Ryan Montgomery, Travis Brown, Jacob Hawkins and Colten Burdette winning heat races. At the drop of the green it was all Fairmont, WV’s Jacob Hawkins in the CJ Johnson Motorsports entry #37, as the talented racer would slice and dice his way around the ‘Bullring’ in vintage Hawkins fashion. Hawkins, who would set a Tyler County Speedway new track record back in April would lap all the way up to the 6th position and take the checkered flag over Ryan Montgomery, Shawn Jett from 10th, Todd Brennan and Travis Brown. Hawkins, no stranger to the Tyler County Speedway Victory Lane would join brother Jared and father Mike Hawkins as past winners of the prestigious Earl Hill Memorial.

A stout field of Jenkins Auto Parts UMP Modifieds would take to the ‘Bullring’ with Kyle Bond jumping out to the lead and look poised for a stop in the West Virginia University of Parkersburg victory lane. Disaster would strike the leader as front-end damage would sideline Bond thus turning the lead over to Daniel Hill. Once at the point, the 3rd generation racer Hill would set it on cruise as the Morgantown, WV racer would park his #8 into Victory Lane in honor of his Grand Dad Earl Hill. Hill would lead Cody Brightwell, Danny Thomas, Chad Smith and Kenny Johnson to the pay window.

St. Mary’s WV racer Tom Sigler would snare his second win of the season in the Sigler Fabrication EDGE Hotmod division presented by Poske Performance Parts. Sigler would turn back race long challenges from Logan Reed early on and Brian Probst late. Sigler would be the first to the stripe followed by Probst, Josh Sigler, current point leader Jeff Gorrell and Steve Magyar.

Cruz Vandall would pick up his 3rd win of the season in only his fourth visit as the driver of the double zero machine would hold off a pesky Wesley Reed to secure the win in the Middlebourne Galaxy Food Center Sportmod division. Vandall would triumph over Reed with Pat Garrett nipping Steven Dotson at the line for third and Mike Sprouse would round out the top five.

Timothy Harlan Jr. would go back to back in the Dinoco #71 in the Bullring Bomber division. A great race long side by side battle between Harlan and Jason Frazier would entertain fans but at the line it was Harlan followed by Frazier, point leader Jake Tidd, Mike Todd and Harvey Wells.

In the Phillips Drug MWRA Mini Wedge division it was Leah Brightwell bagging her sixth straight Junior MWRA race in a row. Following Brightwell to the line was Cruz Thomas and Bryson Roberts. In the Senior division it was Jake Casto grabbing his 5th win of the season over Carson Thomas and Keith Powell.

Be sure to join us again next Saturday Night, July 24th as the Tyler County Speedway plays host to the Rt.2 Rumble Bullring/OVS Challenge Series for the Super Lates, UMP Modifieds & Sportmods plus Backpack Giveaway for the Kids! 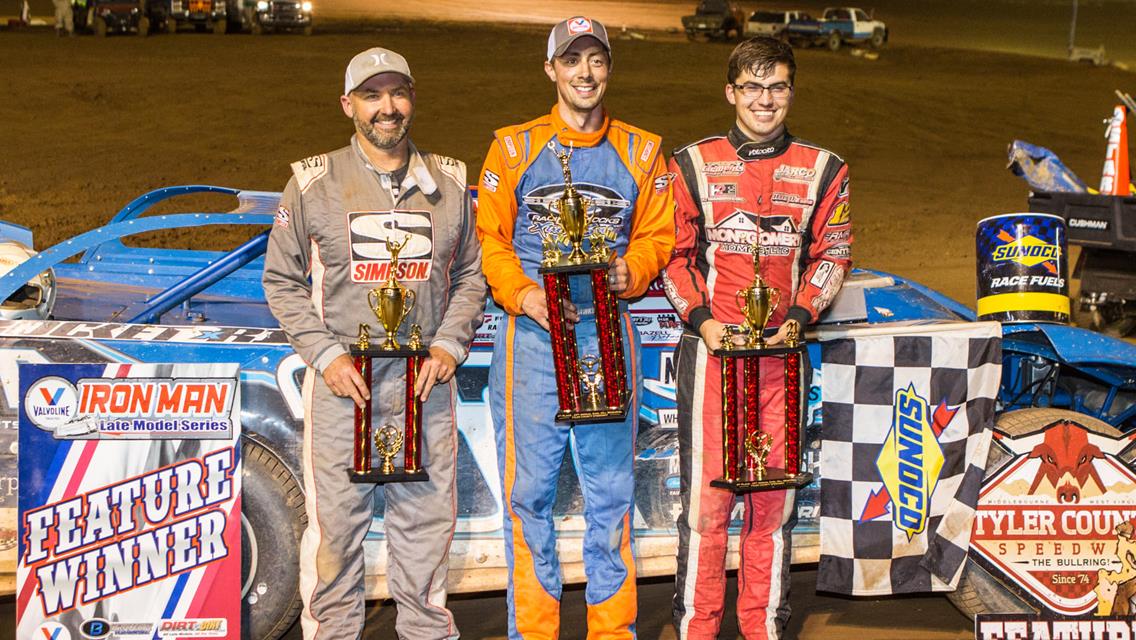 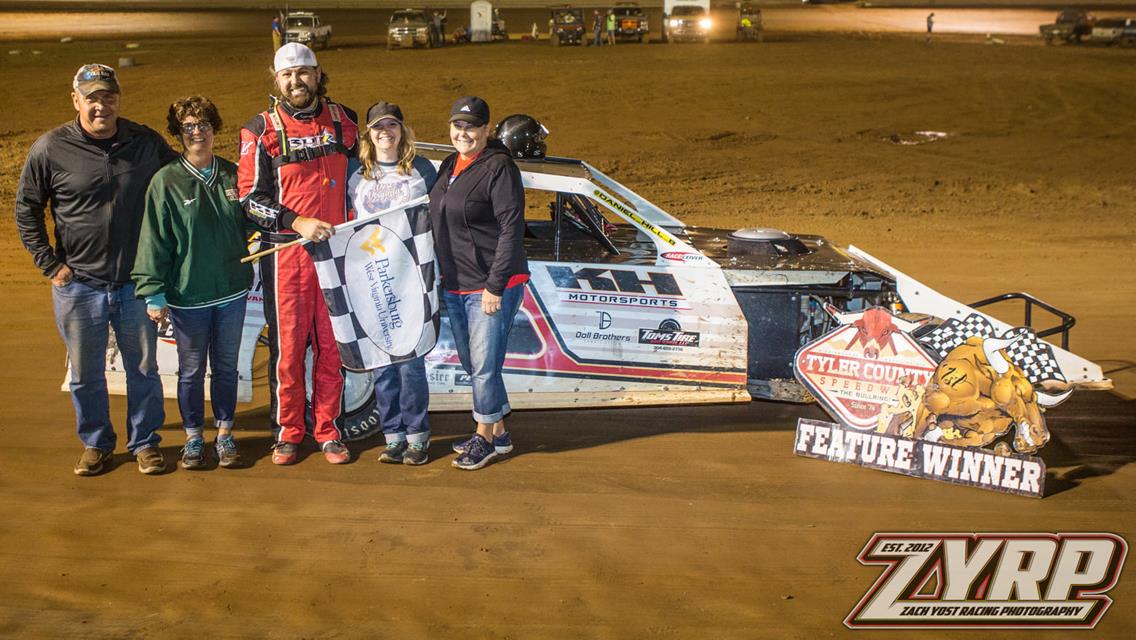 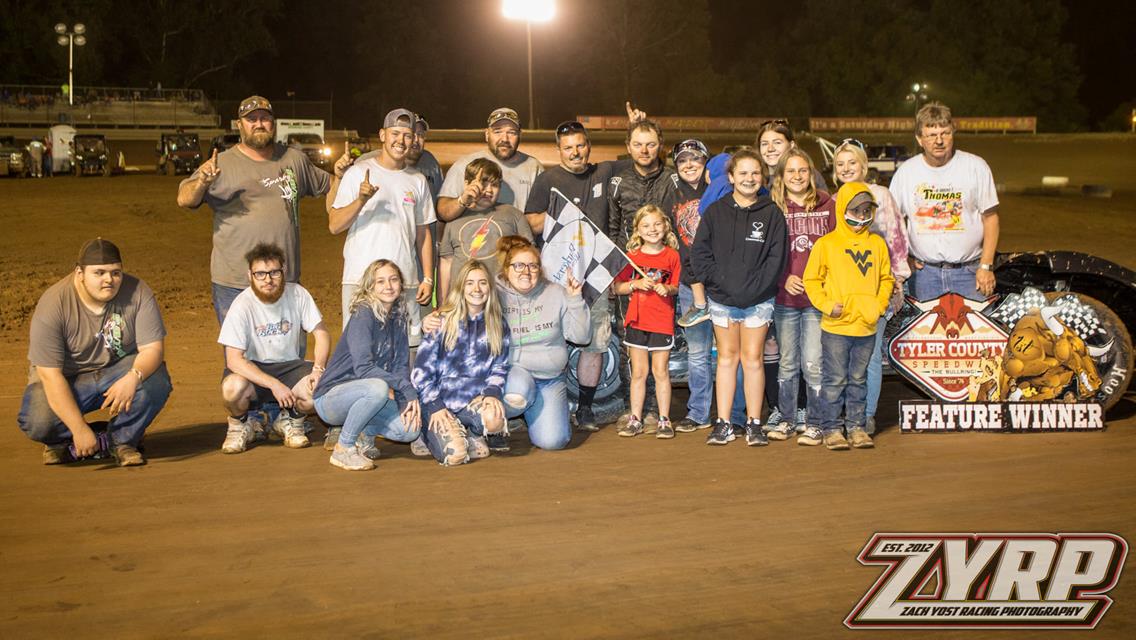 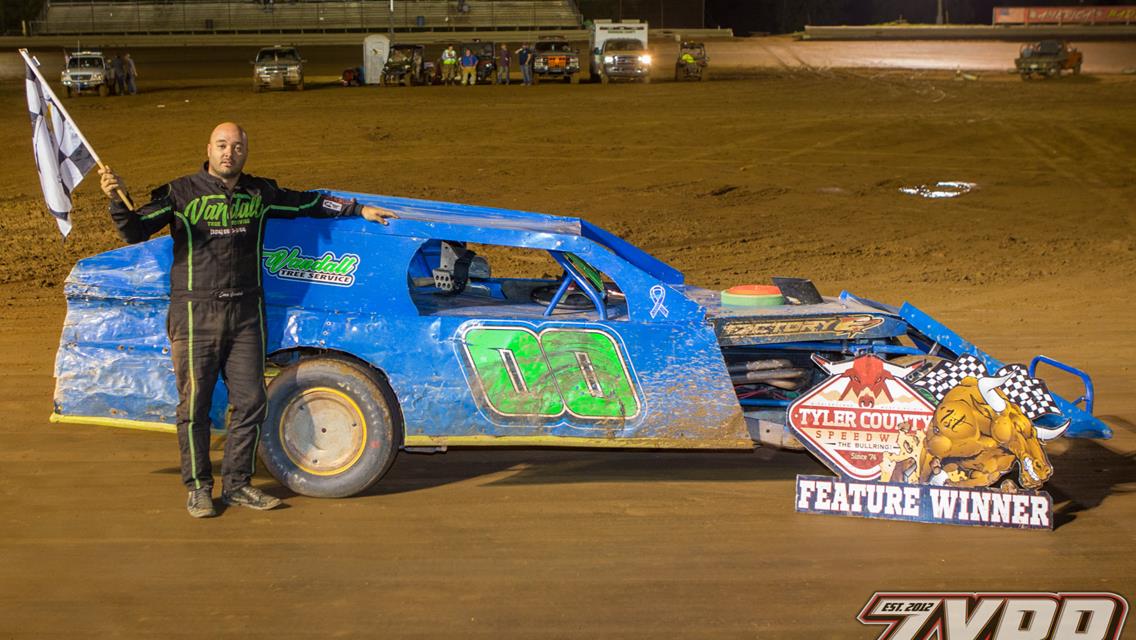 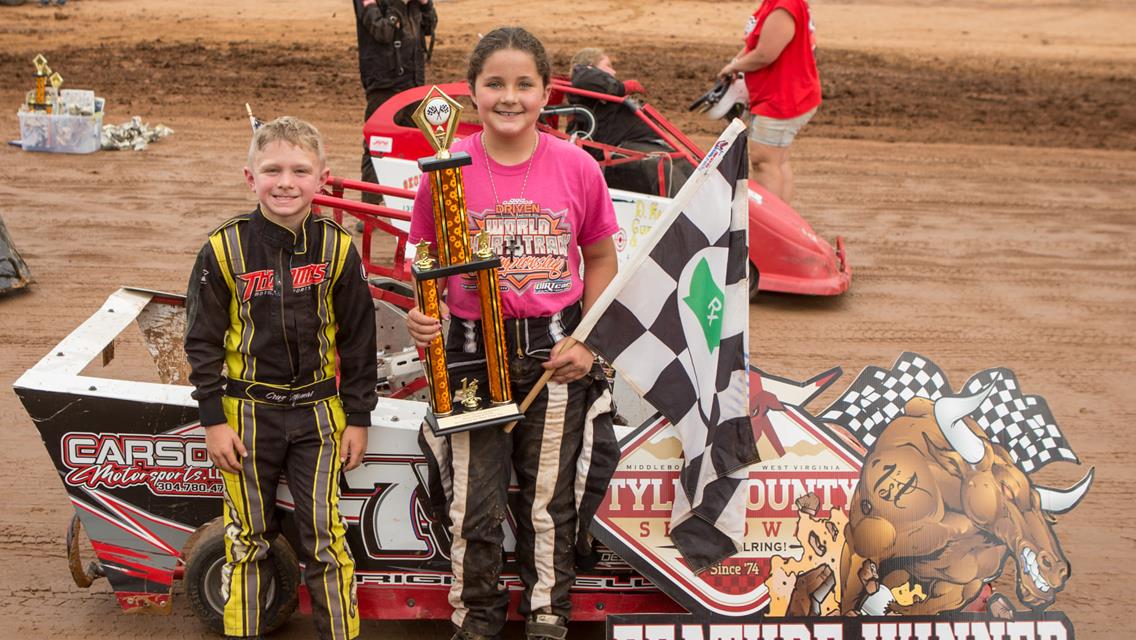 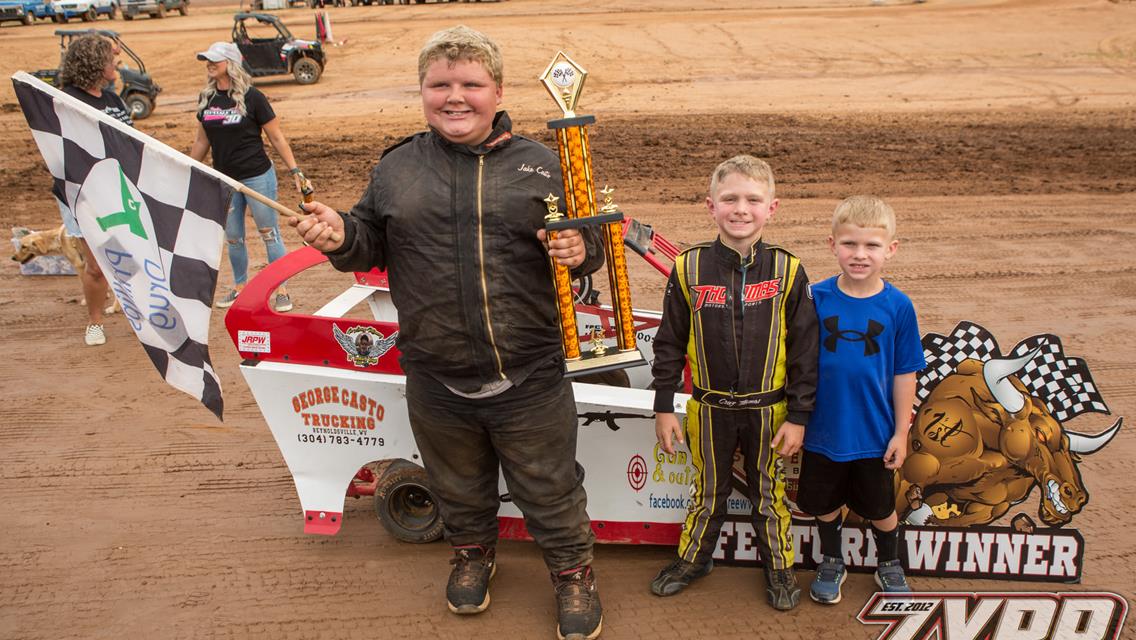