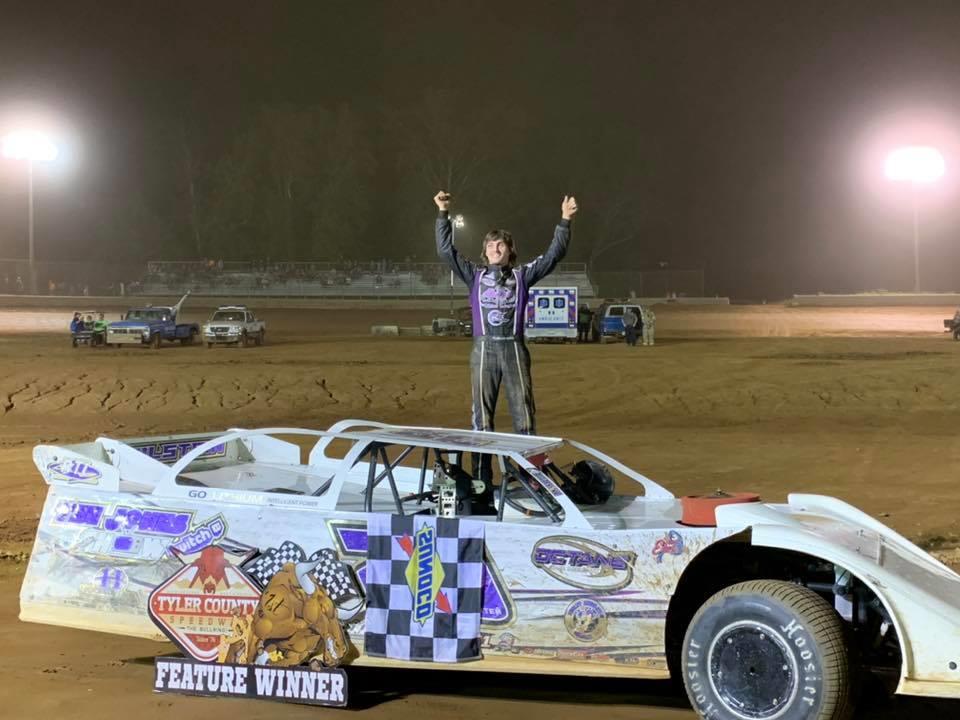 With Mother Nature presenting a picture perfect Saturday Night for racing action at Americas Baddest Bullring another huge field of 150 cars would converge for race weekend #2 at Tyler County Speedway. A stout field of race cars in all classes would welcome an eager fanbase back to the ‘Bullring’ as the 2020 season kicked into high gear. With several inches of rain throughout the week a very heavy and hammerdown surface would present early challenges to racers before rounding into proper racing shape, allowing for some great racing in all classes.

In the Appalachian Mineral Title Company FASTRAK division it was wiley veteran Donnie Dotson of West Union in the #15 machine holding off a pesky Kyle Lukon to secure his first win of the season. Several young lions would be ready to prey on Dotson but the cagey racer would never open the door besting Lukon, last weeks feature winner Trey Watson, Kyle Thomas and Brandon Weigle across the line.

Defending track champion Cody Brightwell would park the Carson Motorsports #79 in the West Virginia University of Parkersburg Victory lane ahead of a bevy of open wheel standouts. A stacked 30 car field would meet at the Bullring but it was the rapidly improving Brightwell holding off ‘Mr. Excitement’ Kenny Johnson to the line and last weeks dominator Daniel Hill. Rounding out the top five was 18th starting Kyle Bond who turned in a very impressive run and Zanesville, Ohio racer Jess Hartman.

It was the Kendall Hodge show in the Sportmod main event. The likeable racer would run a spectacular and consistent race holding off last weeks feature winner Cruz Vandall on his way to his first win of the season. A great battle for the 3rd place and podium finish would see veteran Dwight Henry best a valiant Jason Ammons and Reed Bishop rounding out the top five.

An amazing and wild Sigler Fabrication EDGE Hotmod feature presented by Poske Performance Parts would see race long leader Logan Reed succumb to a powerful slider by Tim Pennell. With the T50 machine at the helm a hornets nest of action would ensue with the talented youngster Reed trying to hold off a pair of ‘Bullring’ veterans in Brian Probst and Danny Thomas. A very exciting race between the top four would see Pennell grab the checkers and head to the West Virginia University of Parkersburg victory lane over Brian Probst, Logan Reed, Danny Thomas and Jeff Gorrell.

In the youth league of auto racing or best known as the Jenkins Auto Parts MWRA Mini Wedge class a very challenging and heavy track for the kiddos would see perennial winner George Casto in the Senior division taking the checkered ahead of Allen Clark and Carson Thomas. In the Junior division it would be 3rd generational racer in only his second race, Cruz Thomas utilizing a late race restart to grab his first ever win over Jake Casto and Bryson Roberts.

A pair of make-up features from the 2019 season would also be on the docket and would see Kyle Lukon of Burgettstown, PA park the Mark Robinson owned 21R in the West Virginia University of Parkersburg Victory Lane. Lukon would hold off Cody Brightwell and Daniel Hill to notch the win. Also in the Bullring Bomber make-up main it was Brett Weekley garnering the Bomber win over Timothy Harlan and Eric Tidd.

Be sure to join us next Saturday Night, June 13th for another action packed night of racing at America’s Baddest Bullring and look for a revised post COVID 19 schedule very soon.