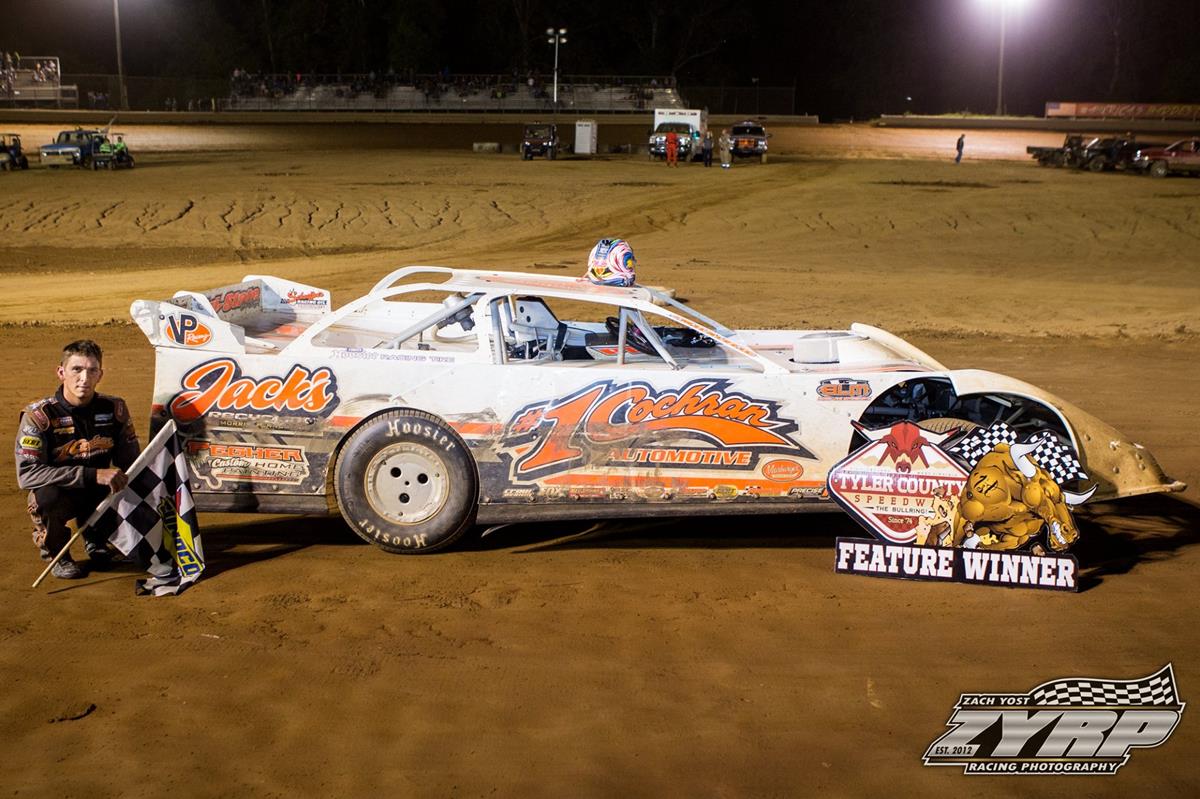 (Middlebourne, WV) With the season well on its way at the Tyler County Speedway one thing is obvious, parity rules the day. As we close chapter #4 of the 2020 season a common theme has emerged as several different feature winners in all divisions have already graced the West Virginia University of Parkersburg Victory Lane. Another great car count of over 100 competitors would grace the pits of the ‘Bullring’ and a very racey and ultra smooth surface would greet the regions best racers.

Four races in and four different winners in the J&R Excavating Super Late Model division presented by Midcap Land and Timber. Cranberry Township, Pennsylvania invader Mike Pegher Jr. aboard the famous #1 Cochran Automotive/ Lynn Geisler owned/ Bachman Trucking/ Fox Racing Shocks would make a late race pass of Brian Baumberger to secure the hotly contested win. Baumberger would blast off the front row and command the point for most of the race and looked very poised in capturing his first Tyler County Speedway Super Late Model win. However, a late race caution would bunch the field and a slip by race long leader Baumberger in turn 2 would give the advantageous Pegher all the opportunity he would need to vault around the ‘Bullring’s’ baby smooth topside to catapult to the lead. Once in front Pegher would roll to the victory over a very fast Brian Baumberger, Kyle Thomas, Kyle Bond and Tyler Stutler. Pegher joins a who’s who list of 2020 Super Late Model winners at America’s Baddest Bullring including Logan Roberson, Max Blair and Tyler Carpenter.

Much like the Super Late Model race, the Advance Auto Parts UMP Modified main event would live up to the billing and produce a very similar feature finish. Defending track champion Cody Brightwell would set a torrid pace at the front with Daniel Hill and KC Burdette locked into a back and forth battle for the runner up spot. Burdette would eventually wrestle bridesmaid spot away from Hill and set his sights on the leader. A late race caution flag would bunch the field and at the drop of the green a blitzing Burdette would roll around the speedways top shelf and overtake race long leader Brightwell. Burdizzle would roll on to take the Phillips Drug Checkered Flag and complete the weekend sweep of the Ohio Valley and Tyler County Speedway A Mains. Following Burdette across the line was Brightwell, Daniel Hill, a rim riding Kenny Johnson and Chad Smith.

In a scant five car Sportmod feature field it was a two man battle between previous feature winners in the division between Cruz Vandall and Kendall Hodge. When the Phillips Drug Checkered Flag would drop it would be South Charleston, WV’s Vandall holding off a closing Hodge to secure the win. Vandall would also complete the Ohio Valley and Tyler County sweep on the weekend. Trailing Vandall and Hodge was Scott Alden, Zack Marks and newcomer Terry Parsons.

Defending Hotmod track champion Danny Thomas of Friendly, WV would pick up his first win of the season in a caution marred Sigler Fabrication EDGE Hotmod presented by Poske Performance Parts main event. Thomas would zip out to the early lead and hold off all challengers and caution flags aboard the Wable Ford/ Dew Drop Inn/ CPS General Contractor/ JW Tire/ Precision Tree Service & Dumpster Rentals/ Fred’s Repair/ LG 2 machine. Following the 7JR across the line was a game Brian Probst, a rapidly improving Logan Reed, Steve Magyar from the tail and Josh Sigler in his 2020 maiden voyage.

The Little League of Auto Racing, the Jenkins Auto Parts MWRA Mini Wedges would kick off the evenings event with Jake Casto parking the 19culater machine in the West Virginia University of Parkersburg Victory Lane ahead of Cruz Thomas and Bryson Roberts. The Senior division would really thrill early arriving fans in what can only be described as probably the race of the year in the MWRA. A Talladega style draft around the Bullrings high side would see a four-car battle wage throughout with sliders, bump and drafts between George Casto, Keith Powell, Carson Thomas and Allen Clark. The outcome of this one would not be determined until the fourth turn of the last lap as the foursome could be covered with a postage stamp. Picking up the thrilling contest narrowly at the line was Keith Powell over Allen Clark, George Casto and Carson Thomas in a great race.

Be sure to join us next Saturday Night, June 20th for another exciting night of action-packed racing at America’s Baddest Bullring. Stay tuned for a new 2020 revised schedule coming soon.