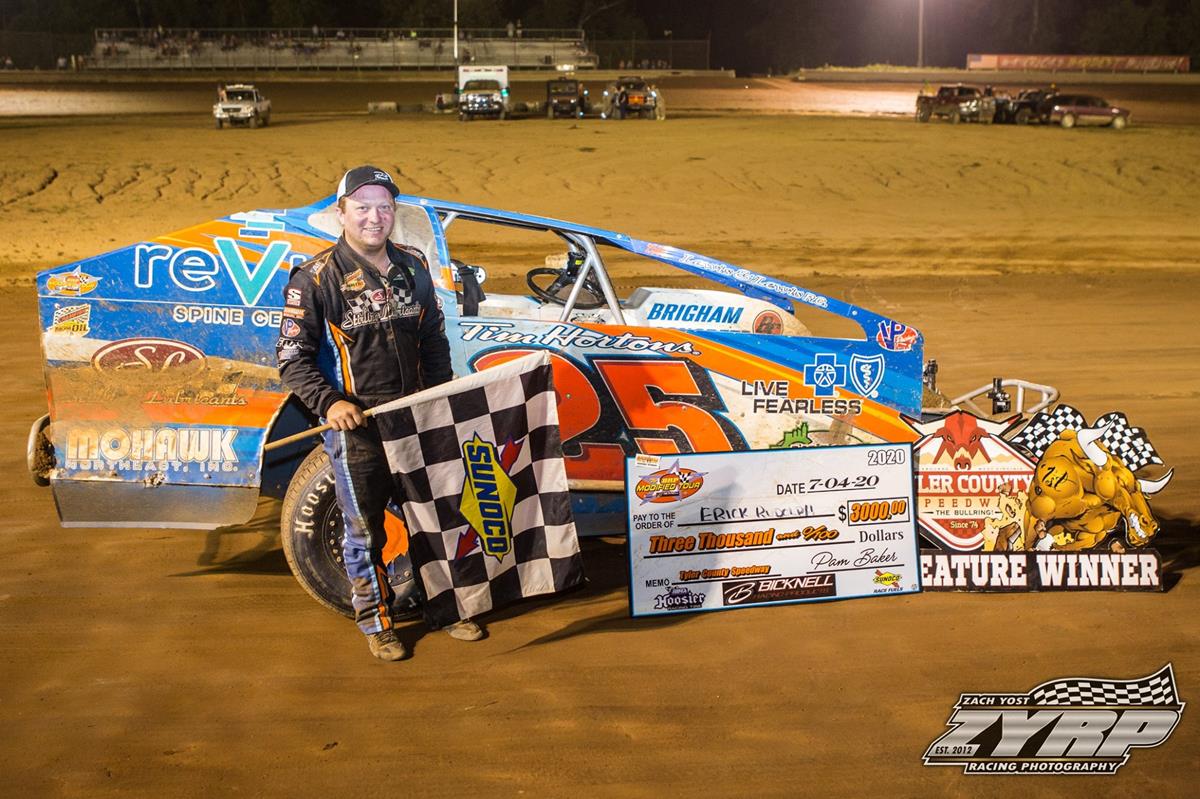 A wild and crazy night at the ‘Bullring’ that would see sweltering heat, a power outage and full moon fever all in full force. But through it all some great racing would see Pennsylvania’s BRP Big Block Modified Tour roll into town for their 2020 lone appearance in the Mountain State. Twenty six teams would swell the pit area with a familiar face gracing the West Virginia University of Parkersburg Victory Lane. Erick Rudolph of Ransomville, NY would pick up his third career BRP Big Block win at Tyler County Speedway. Rudolph would follow up his Friday Night win at the Lernerville Speedway with a drive from the 7th starting position and hold off a last lap shootout with Rex King Jr. to secure the win. Following Rudolph and King Jr. across the line was Rex King Sr., Jim Rasey and Brad Rapp.

In an emotional roller coaster of a season for the Irvin Brown Race Team, Super Late Model driver Travis Brown would be back on the track for the first time after a nasty crash early in the season. There would be no rust as Brown would debut his new ‘In Memory of Garrett Watson’ ride and park the Jacksonburg Pit Stop/ Boston Hill Angus/ Palmers/ Octane/ Hayhurst Law/ Colonial Life/ Hometown Gas #31199 to the Phillips Drug Checkered Flag in the J&R Excavating Super Late Model main event presented by Midcap Land and Timber. An emotional win as the likeable racer from Jacksonburg, WV would pick up his first win of the season and become the 6th different Super Late Model winner this year. A tremendous battle for 2nd place would wage the entire races duration with Steve Weigle eventually claiming runner-up credentials ahead of Derek Doll, Kyle Thomas and Shawn Jett.

In the Advance Auto Parts UMP Modified main event Doug Carson of Sistersville, WV would park his 22DC machine in the West Virginia University of Parkersburg Victory Lane for his first career feature win at the Tyler County Speedway. It would not come easy as the driver of the Carson Motorsports entry would vault from his front row starting spot and drive a very steady mistake free race on his way to holding off Chad Smith, Rich Michael Jr., teammate Cody Brightwell and Jeff Fornash.

The ‘Flattop Flyer’ Kendall Hodge would snare his 3rd feature win of the season in the Sportmod division over Matt Yost and Shawn Vanhorn.

A strong field of 26 Sigler Fabrication EDGE Hotmods presented by Poske Performance Parts would see challenging feature event conditions for the division as the pesky fog would roll in during the main event. Picking up the shortened feature win would be Daniel Muldrew of Fairmont, WV driver of the #21m Ohio Valley Awards machine besting Steve Magyar, Danny Thomas, Kevin Dotson and Logan Reed.

The fog would roll in and take the checkered flag before the Bullring Bomber main event, setting up a Double Feature for the ever-growing division next Saturday Night.

The Little League of Auto Racing would kick off the night and in the Jenkins Auto Parts MWRA Junior Mini Wedge feature it would be Peyton Baker picking up his first ever feature win. Following Baker to the trophy line was Jake Casto and Kyler Lyons. In the Jenkins Auto Parts Senior class the familiar George Casto would win ahead of Carson Thomas and Keith Powell.

Be sure to join us next Saturday Night, July 11th as the Tyler County Speedway will host the RUSH Sprint Car Series along with racing in all other classes.