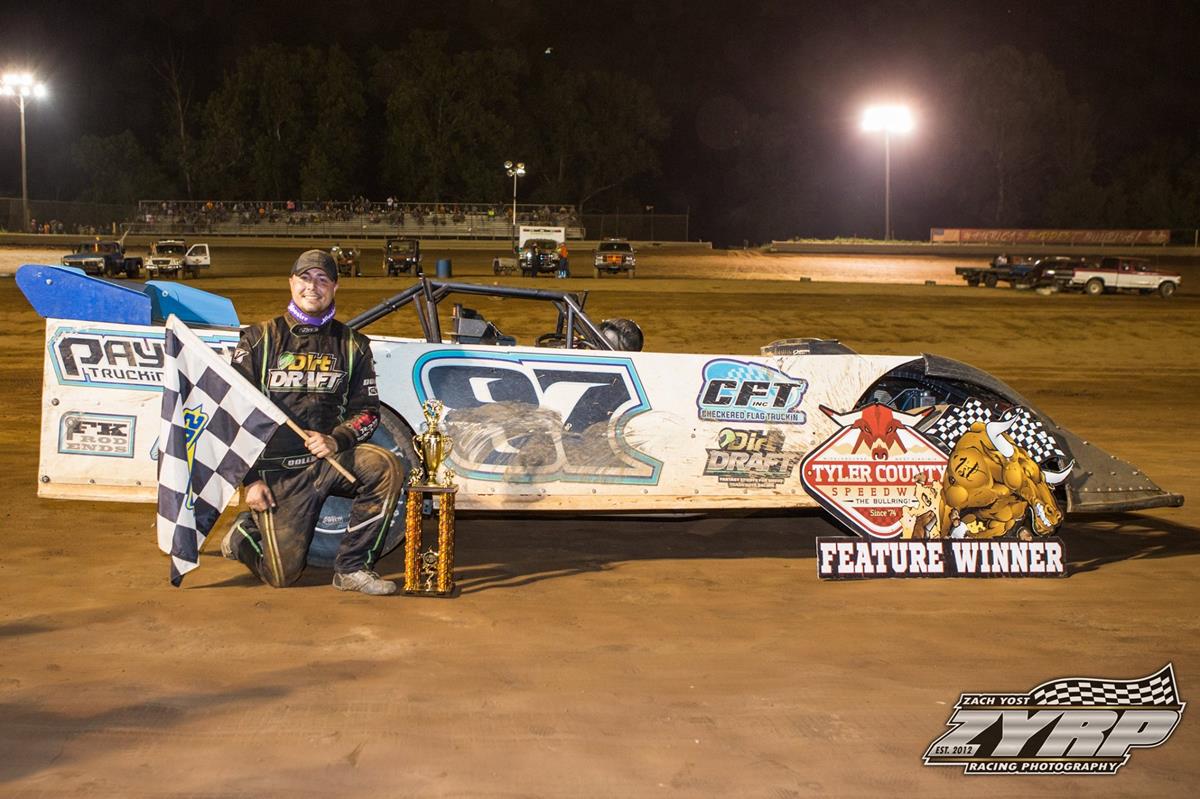 In the evenings main event the J&R Excavating Super Late Models presented by Midcap Land and Timber would compete in the 26th Annual Topless 50. Always a fan favorite event and the nations 2nd oldest Topless late model race in America. The 2020 version did not disappoint as it would live up to the hype of previous Topless versions. Derek Doll of Pennsboro, WV driving the Marshall Doll owned Payne’s Trucking/ Tom’s Tire and Wheel/ Dirt Draft/ Checkered Flag Trucking Rocket XR1 would pass Ryan Montgomery with two laps to go to secure his 2nd ever Topless 50 victory. An unbelievable race for all 50 laps as Henry Hornsby would set the early pace with Ryan Montgomery glued to his bumper while the field would fan out running two and three wide throughout the pack. A lead pack of Hornsby, Montgomery, Kyle Thomas, Derek Doll, and a charging Colten Burdette would race in a pack going back and forth for positions within the top five for the races majority. Disaster would strike Hornsby as a flat tire would ruin his chance at his first Topless 50 title. This would turn the lead over to Montgomery with a rear view of Derek Doll and Colten Burdette. Montgomery would persist in living and dying on the cushion while Burdette and Doll would work the middle and bottom. Montgomery would jump the cushion with two to go giving Doll the break he needed to slip under for the win and the Phillips Drug Checkered Flag. Another outstanding super late model race at Tyler County would see Doll become the 8th different super late model feature winner in 2020 at the ‘Bullring’. Following the 5th starting Doll to the West Virginia University of Parkersburg Victory lane was 8th starting Colten Burdette, Ryan Montgomery, Kyle Thomas who was in the mix all night long and a fine run by 12th starting Cody Rogers.

Defending UMP Modified track champion Cody Brightwell driving the Carson Motorsports entry would notch his 2nd Phillips Drug Checkered flag of the season. It would not be easy as Brightwell would need to turn back challenges from multi time winner Daniel Hill and a rim riding and closing Kenny Johnson to secure the win. Following Brightwell across the line was Hill, Johnson, Jason Brookover and Brian Clegg.

In the Sigler Fabrication EDGE Hotmod division presented by Poske Performance Parts it was Danny Thomas parking the 7JR machine in the West Virginia University of Parkersburg Victory lane for the 4th time in 2020. Thomas would cross the line ahead of Logan Reed, Tom Sigler, Daniel Muldrew and Josh Sigler.

The youth league of auto racing, the Jenkins Auto Parts MWRA Mini Wedges would open the show per usual but would find themselves on the new infield track at the ‘Bullring’. Experienced short track racers George and Jake Casto would lead the way and both take Phillips Drug Checkered Flags. George Casto would best Keith Powell and Carson Thomas in the Senior division while brother Jake Casto would snare the Junior division over Cruz Thomas and Bryson Roberts.

Join us next Saturday Night, July 25th for the Annual Bud Weigle Memorial at the Tyler County Speedway.