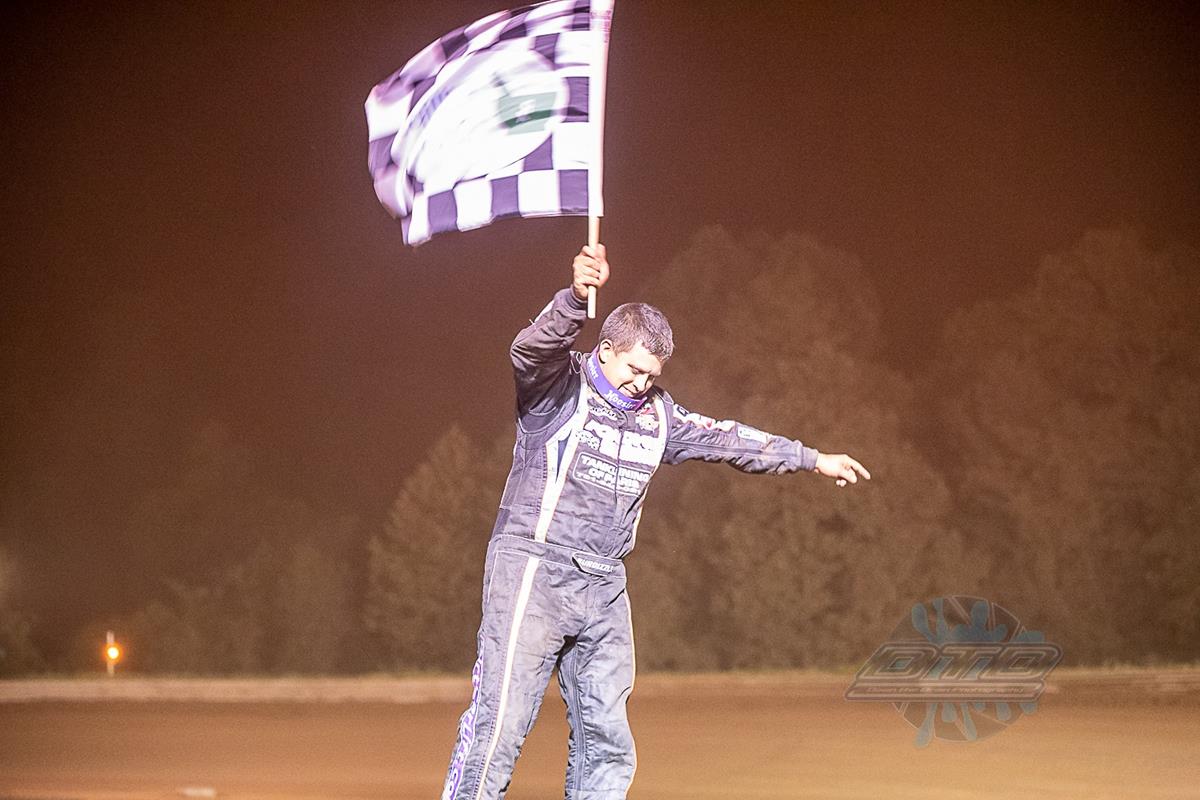 (Middlebourne, WV) The Tyler County Speedway roared back to life on Saturday Night, September 12th as over 170 cars packed the pit area as the ‘Bullring’ would wrap up the 2020 season with the running of the ‘Legends of the Fall’. A great night of short track racing would see three monumental races including the 32nd Annual Earl Hill Memorial, 16th Annual Dickson Classic and 10th Annual Pat Herrick all take center stage on a beautiful night of racing and picking up huge wins were Colten Burdette, KC Burdette and Donnie Dotson.

In the J&R Excavating Super Late Models presented by Midcap Land and Timber it was Parkersburg, WV’s Colten Burdette blitzing the field to garner his first win this season at the ‘Bullring’. Burdette would add his name to the tradition laden winners list of the prestigious Earl Hill Memorial. Following Burdette across the line was southern WV racer Chris Meadows, Shane Hitt, 2020 track champion Shawn Jett from the 12th starting spot and Steve Weigle would round out the top five.

A stout 33 car UMP Modified field would arrive with the 16th Annual Dickson Classic up for grabs. When the Phillips Drug Checkered Flag would fall it would be a familiar name in victory lane. Just like his brother earlier in the night in the Super Late division it was KC Burdette nabbing the special event and pick up win #2 of the season at Tyler County Speedway. Burdette would continue his 2020 stellar season holding off an impressive Coleman Evans, Eddie Carrier Jr., Jesse Wisecarver and a charging Daniel Hill to the stripe. Congrats to Cody Brightwell for going back to back and clinching the 2020 UMP Modified track championship at the ‘Bullring’.

A season high 34 entrants would show up in the Sigler Fabrication Hotmod division presented by Poske Performance Parts. Due to the large number of entrants, management would decide to split the class into two groups and pay two purses with Jamie Thomas and Jeff Gorrell each going to the West Virginia University of Parkersburg Victory Lane. In feature #1 it was Jamie Thomas aboard the Travis Thomas owned #18 picking up his first career win in the Norman Jackson Trucking/ D&L Trailer/ Sigler Fabrication machine. Following Thomas across the line was Steve Magyar, Josalyn Hibbard with a career best run, Tom Sigler and Kevin Dotson. Feature #2 would see Middlebourne, WV’s Jeff Gorrell notch his first win of the season aboard the Sistersville Pharmacy machine ahead of Logan Reed, Lou Ennis, Dusty Isner and Tyler Spencer. Congrats to Danny Thomas for picking up his third consecutive track championship in the Sigler Fabrication Hotmod class.

A solid field of 24 Sportmods would roll into the ‘Bullring’ with 2020 dominator Kendall Hodge putting the finishing touches on a terrific season at the Middlebourne oval. Hodge would make his 5th trip to the West Virginia University of Parkersburg Victory Lane enroute to a track championship at Tyler and the Ohio Valley Speedway. Following Hodge to the stripe was Randy Kerns, Robin Ours, TJ Arnold, and Ronnie Pickins.

The Youth League of Auto Racing would kick the show off in usual fashion with newcomer Blake Tasker grabbing the Phillips Drug Checkered Flag ahead of Cruz Thomas and Bryson Roberts in the Jenkins Auto Parts Junior division. In the Senior class it was George Casto picking up the win ahead of Allen Clark and Natalie Hibbard. Congrats to George and Jake Casto for winning track championship in the Jenkins Auto Parts MWRA classes.

This closes the 2020 season at America’s Baddest Bullring and we wish to thank all those that graced the gates at Tyler County Speedway this season for making it a great season under the difficulty of the covid pandemic. The Hometown Racing Association will begin planning for the 2021 season and look forward to another great season at the ‘Bullring’.