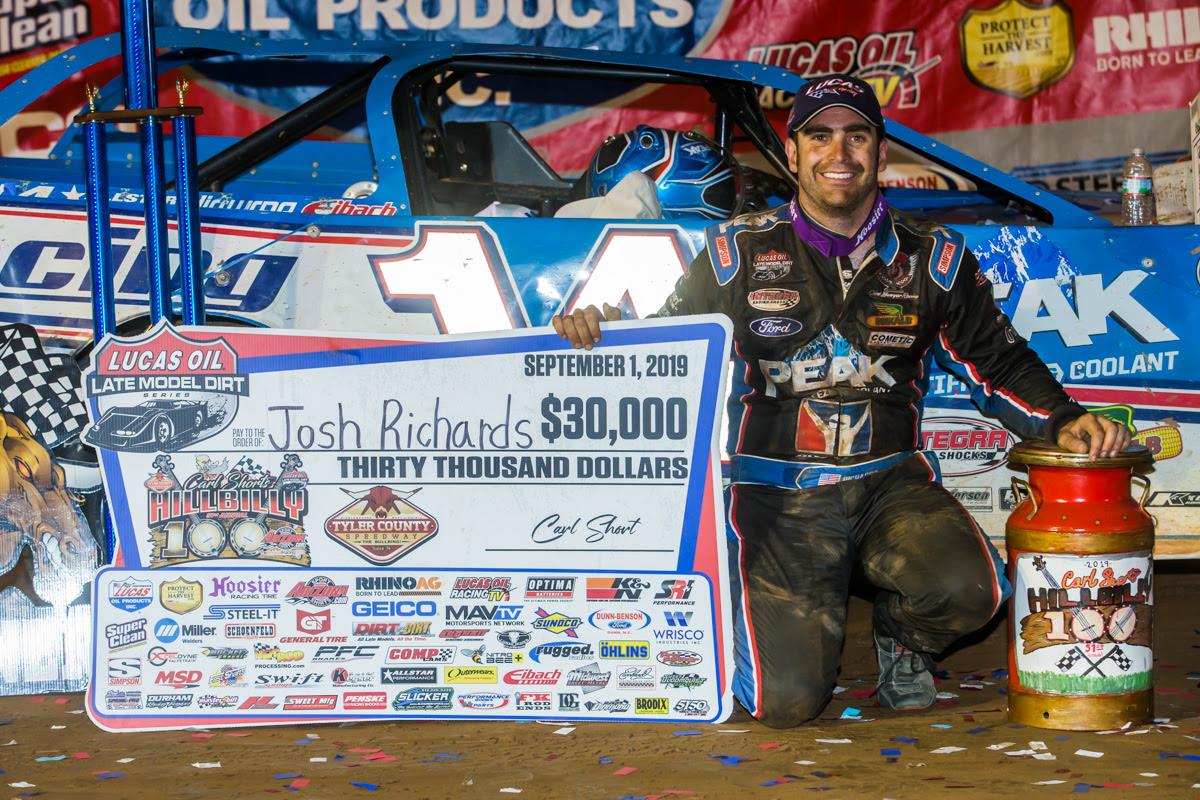 The 31-year-old grew up coming to the track, and tonight, led all 100 laps to score the Lucas Oil Late Model Dirt Series victory worth $30,000 in front of a capacity crowd.

Richards' third Lucas Oil win of the season came over the defending Hillbilly Hundred winner Brandon Overton, Tim McCreadie, 20th starting Shanon Buckingham, and Jimmy Owens. Richards fought off the challenges of Owens for the first 80 laps of the race as they ran 1-2 for that entire distance until a caution flag with 20 laps to go changed the complexion in the race for second.

On the restart Richards maintained his lead and McCreadie moved into second. At one-point McCreadie, Overton, and Buckingham raced three-wide around the tight bullring for the second position. A caution with seven laps to go set-up a quick dash to the finish. Richards again pulled away just enough to pick up the win while Overton passed McCreadie for second with two laps remaining.

In front of a partisan West Virginia crowd, the homestate driver had accomplished one of his life-long dreams, by winning America's oldest dirt late model crown jewel event. "I don't know if I wanted to see that last caution. I wanted to get a couple of lap cars between myself and those other guys. You never know what you got. The right rear tire was getting a little warmer than I wanted. The car was phenomenal. The guys did a great job on the car."

"I used to come here with my uncle Robbie Scott and watch everybody win this race, guys like Davey Johnson who drove for my dad won this race. I want to thank the crowd; they are great as always tonight and thanks to Carl Short for putting on this event."

"We have had a good car all year long. We have had a lot of speed. We just don't have the finishes we deserve. It's pretty cool to finally win this race. I would have liked to have seen it go all 100 laps without caution. Once you're out there you are laser focused. I felt like I had some pretty good distance from the lapped cars. The track was smooth all night it was a fun race."

Overton, who captured the 50th anniversary of the Hillbilly Hundred last year the event with a two-race win streak at Tyler County. "That was a good race. It's like being a day late and a dollar short. My hat is off to Josh and his crew for the win. They deserved it. Rocket Chassis ran first and second so that's good. We've had a good weekend to come with the win last year and second tonight we are very pleased with that. I felt like we had a winning car, we just ran out of laps."

McCreadie topped off his weekend with his third podium finish in as many nights. "That's the way it goes when that last caution came out. Our car got too snug. I had to run so hard early on to get to the front. It was a racy little track tonight for sure. The track was drier than last year and that made it racier. I hope everybody had a great time watching that. It was great fun racing out there tonight."