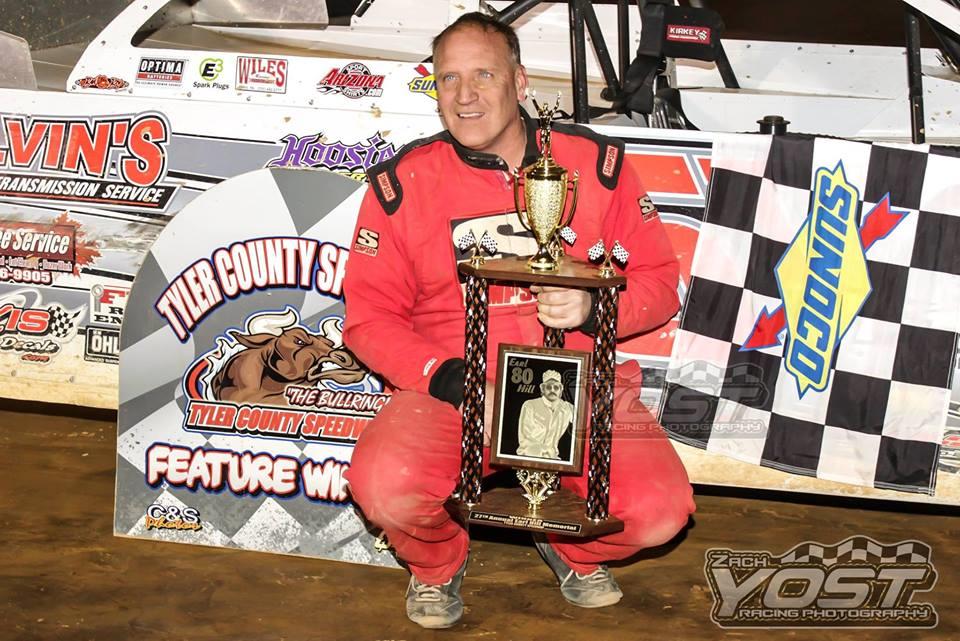 Middlebourne, WV) Tyler County Speedway rang in the 2016 racing season in grand fashion as the ‘Bullring’ presented a double header weekend. Beautiful summer like weather would greet eager racer fans as the bulging pit area would see over 230 race cars invade the Middlebourne, WV oval for the Thursday Thunder show and the running of the 27th Earl Hill Memorial. The action would kick off on Thursday Night, April 14th with the return of the AMRA/STARS Super Late Model Series kicking off their season with Shinnston, WV’s Robbie Scott ushering in the return of the famed series with a dominating win. Also on the docket was Night #1 of the ‘Heritage 101’ weekend for the Renegades of Dirt Modified Tour. Some 38 open wheel modifieds would take the challenge with Jacob Hawkins of Fairmont, WV aboard the Two Brothers Motorsports entry winning a terrific modified feature that seen Hawkins wage war in a mid-race battle with Jesse Wisecarver in typical ‘Bullring’ fashion and hold off a hard charging Shon Flanary at the stripe for the win. Also picking up wins during the Thursday Thunder program were Pennsylvania’s Mike Pegher aboard the Jerry Haseleu owned RJ1 machine in the FASTRAK Late Model division. Former track champions Travis Thomas and Mitch Ward started the season with wins in their respective Hotmod and Modlite divisions, while Robert Frohnapfel would grab the 1st 4 Cylinder main event of the season.

The ULMS Super Late Model Series would roll into town in honor of speedway legend and fan favorite Earl Hill as the speedway would play host to a stout field of 30 Super Lates. In the end it was Cross Lanes, WV’s Tim Dohm aboard the familiar 6t machine besting some of the regions best to capture the 27th Annual edition of the prestigious Earl Hill Memorial ahead of Jared Hawkins, Eddie Carrier, Mike Benedum and Kyle Thomas. Beckley, WV’s Aaron Barley would make his 2016 debut a good one by cashing in on his first feature win of the season in the FASTRAK Late Model feature. A strong field of 30 hotmods would take up promoter John Watson’s challenge of exceeding 30 cars management would opt to run two separate features for the fastest growing class in the area. Picking up EDGE Hotmod wins were Travis Thomas doubling up on the weekend by outdueling Brian Shaffer and Lou Ennis in a fantastic three car race long battle and Mick Baker of Middlebourne would grab his first checkered flag of 2016 in the EDGE Hotmod Feature race #2. A crowd pleasing last lap pass would see young Daniel Eddy aboard the 99e garner his first Modlite feature win in thrilling fashion ahead of track champion Josh Baldwin and Mitch Ward. Scott Critchfield would snare his first 4 Cylinder main of the season while the youth league of auto racing, the MWRA Mini Wedges would kick off their season with Tristan Borkoski and George Casto III grabbing opening night wins.