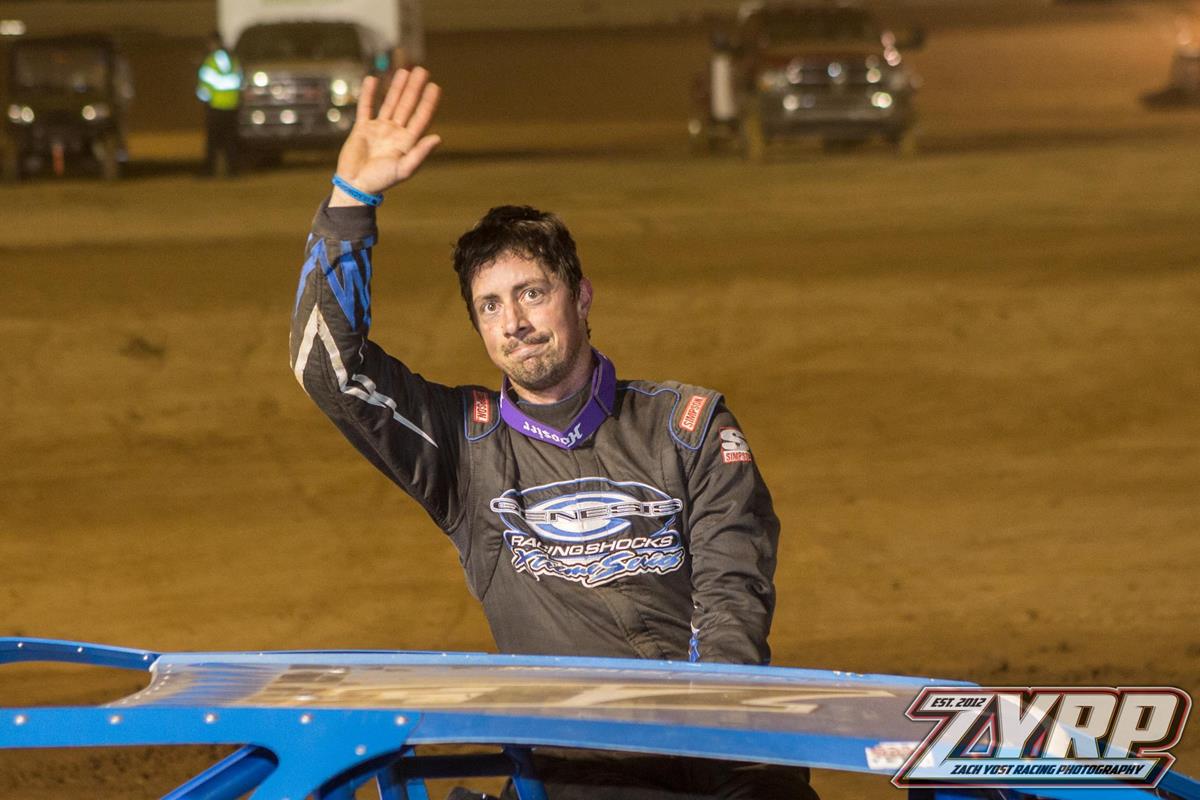 The Tyler County Speedway was once again the place to be this Saturday Night as not only did the ‘Bullring’ crown its 2021 track champions but pivotal Hillbilly 100 provisional spots were sorted out in all divisions. Earning a starting spot in the ‘Granddaddy’ of dirt late model major events, the Hillbilly 100 was Jacob Hawkins with KC Burdette, Kyle Thomas, Lance Weppler, Josh Sigler, Timothy Harlan Jr., Leah Brightwell and Wyatt Demoss also earning a spot in other Hillbilly weekend events.

In the main event of the night it was Fairmont, WV’s Jacob Hawkins blitzing the field in the J&R Excavating Super Late Models presented by Midcap Land and Timber to secure a guaranteed starting spot in the 53rd Annual Hillbilly 100. Hawkins appears poised to be a serious threat to turn back the challenge of the stars of the Lucas Oil Dirt Car Series and defend the hometurf this Labor Day weekend. The talented Hawkins has been extremely fast all season, setting a new track record back in April and also notching the Earl Hill Memorial in 2021 at the ‘Bullring’. Following Hawkins across the line was Corey Conley, Travis Brown, Brian Baumberger and Shawn Jett. Congratulations to your 2021 Tyler County Speedway Super Late Model track champion Shawn Jett.

Another stout field of Jenkins Auto Parts UMP Modifieds would hit the highbanks with Parkersburg, WV’s KC Burdette parking the KC44 machine in the West Virginia University of Parkersburg Victory Lane. With the win, Burdette would earn a provisional spot in the White Lightnin’ 35 and would head to the pay window over Cody Brightwell, Anthony Arbogast, Sonny Conley and Chad Smith. Congratulation to your 2021 UMP Modifed track champion Cody Brightwell.

In the race of the night, Josh Sigler would park his Sigler Fabrication machine in the WVU-P Victory Lane in the EDGE Hotmod division. Sigler would earn his first win of the season and become the divisions 8th different feature winner in the regions most economical support division. It would not be easy for Sigler as the likeable racer would have to hold off last week’s Workin’ Man World Championship winner Daniel Muldrew to secure the win as the duo exchanged exciting sliders in the races waning laps. Sigler would take the checkers over Muldrew, Steve Magyar, Tom Sigler and Santino Loretta. Congrats to 2021 Hotmod track champion Jeff Gorrell.

Marietta, Ohio’s Lance Weppler continued his stranglehold on the West Virginia University of Parkersburg Victory Lane at the ‘Bullring’ by picking up his 7th victory of the season in the Middlebourne Galaxy Food Center Sportmod division. Weppler would be followed to the pay window by Brandon McGrady, Wylie Ford, Mitch Ward and Robin Ours. Congrats to Steven Dotson for claiming the 2021 Sportmod track championship.

Kicking off the evenings action was the little league of racing and it was once again Leah Brightwell nabbing her 9th win of the season ahead of Cruz Thomas and Bryson Roberts in the Phillips Drug MWRA Junior division. Congrats to Cruz Thomas for picking up his first MWRA track championship. In the Senior MWRA division it was Wyatt Demoss going back to back followed by Carson Thomas and Peyton Baker. Congrats to Carson Thomas for securing the Phillips Drug Senior MWRA track championship.

No racing next Saturday Night, Aug. 28th as America’s Baddest Bullring prepares for the biggest motorsports event in the state of West Virginia, the 53rd Annual Hillbilly 100, Sept. 3-5th. Don’t miss three days of side by side racing featuring the regions best racers and the nations superstar late model racers do battle on the highbanks. The Lucas Oil Dirt Car Series will roll into town with $30,000 on the line in the 53rd edition of the Hillbilly 100. Advanced tickets are still available online at www.tylercountyspeedwayonline.com. 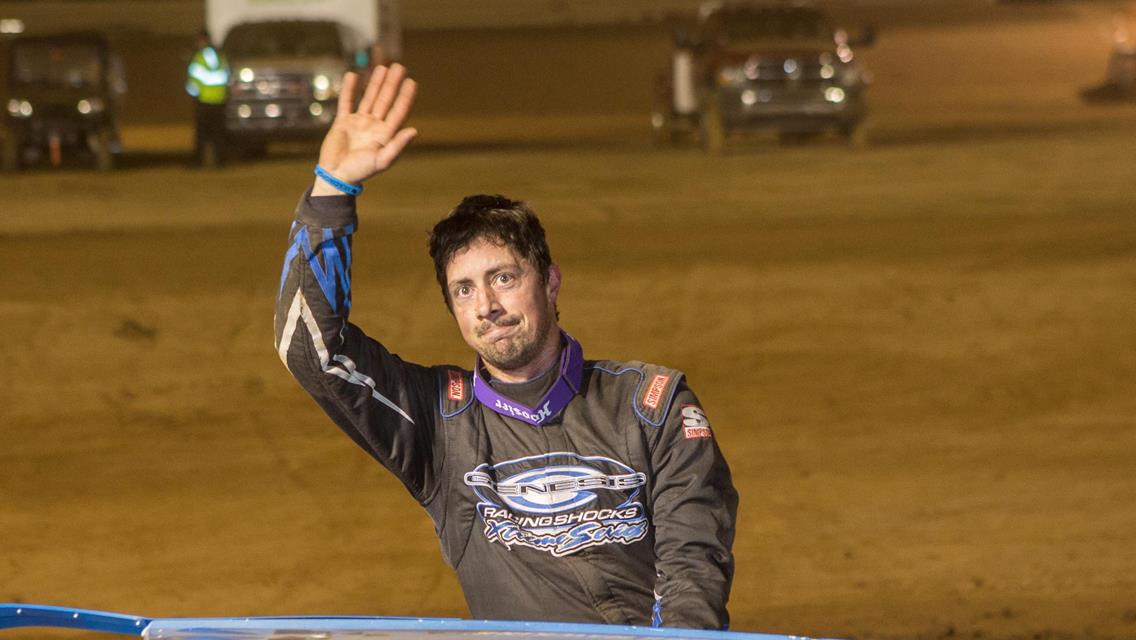 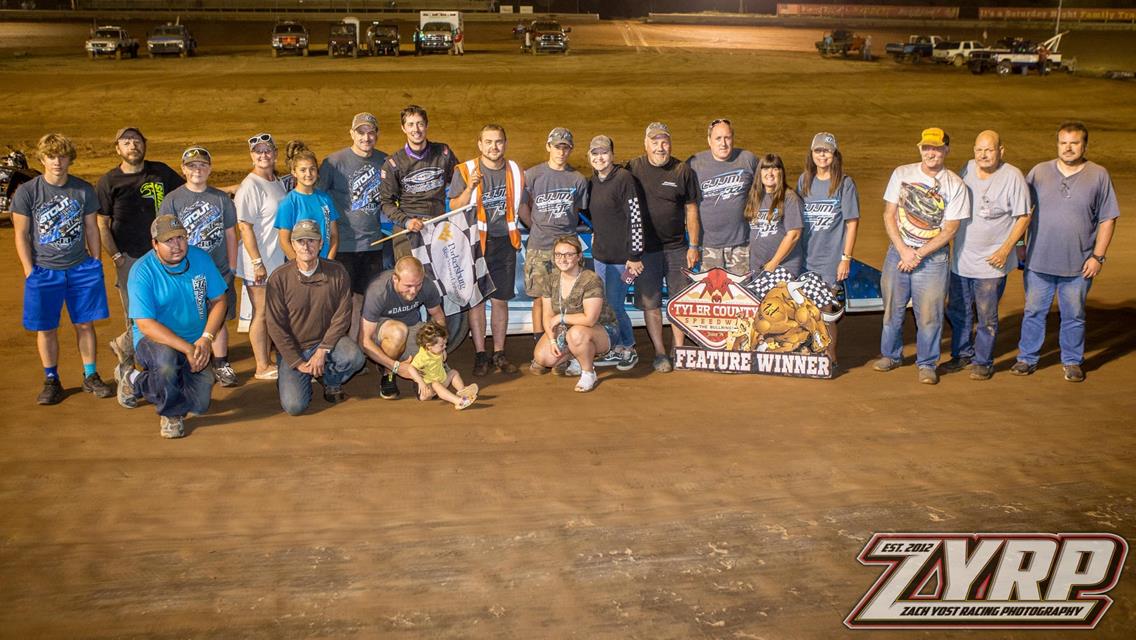 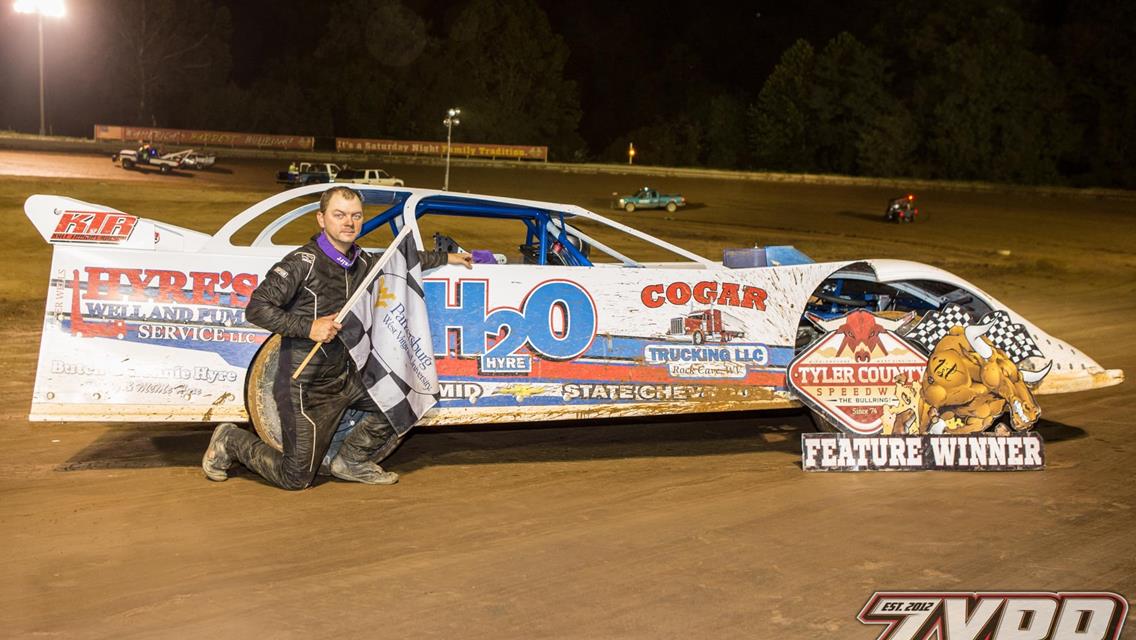 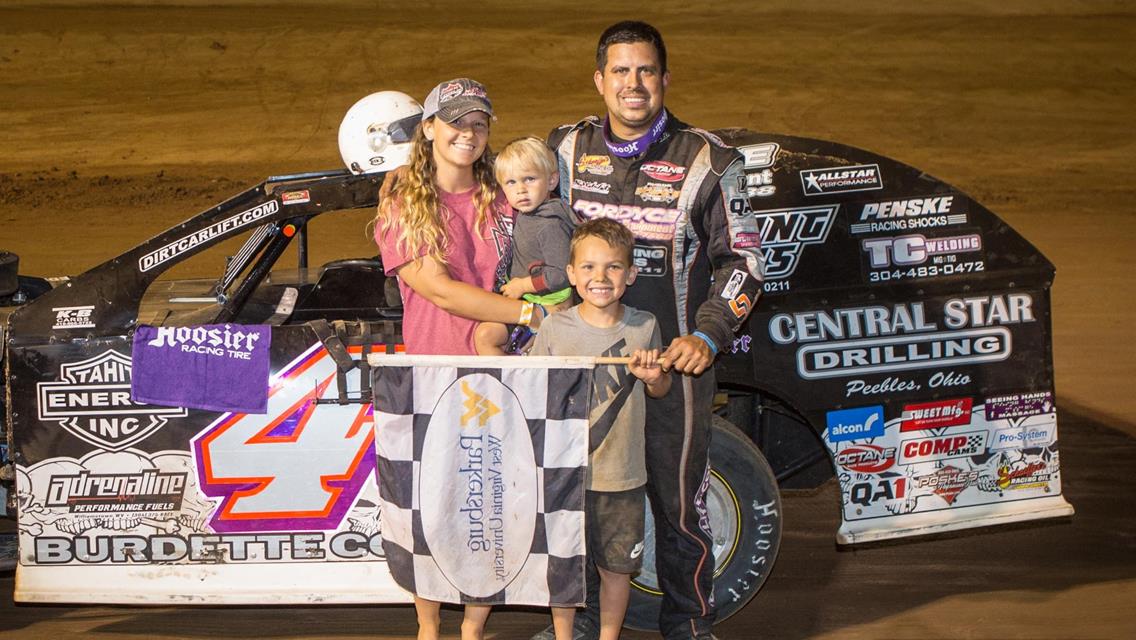 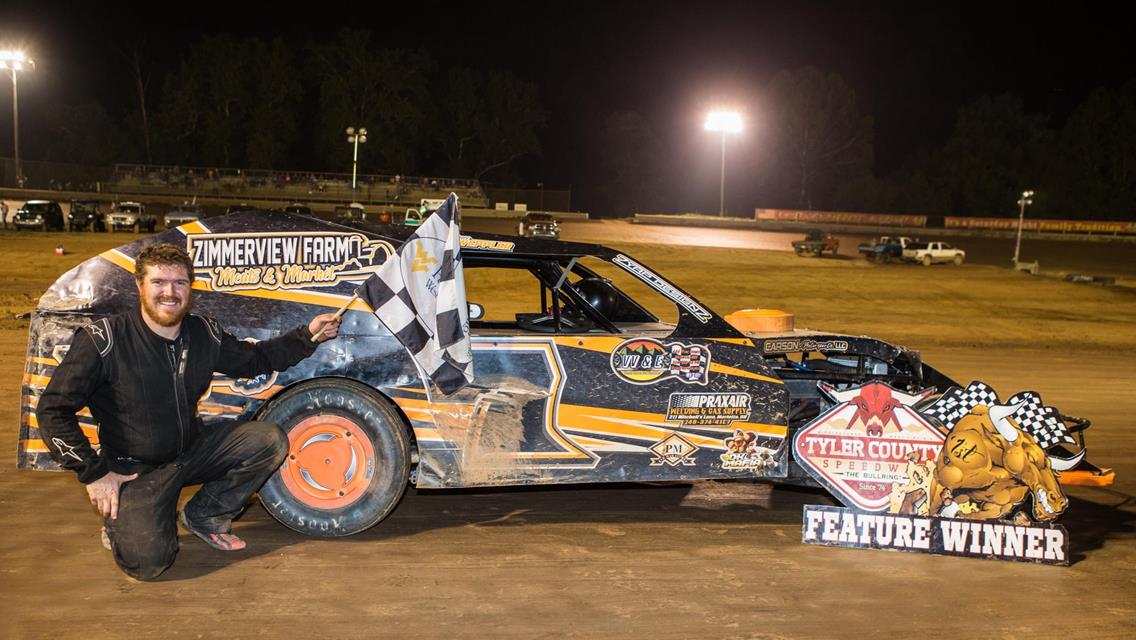 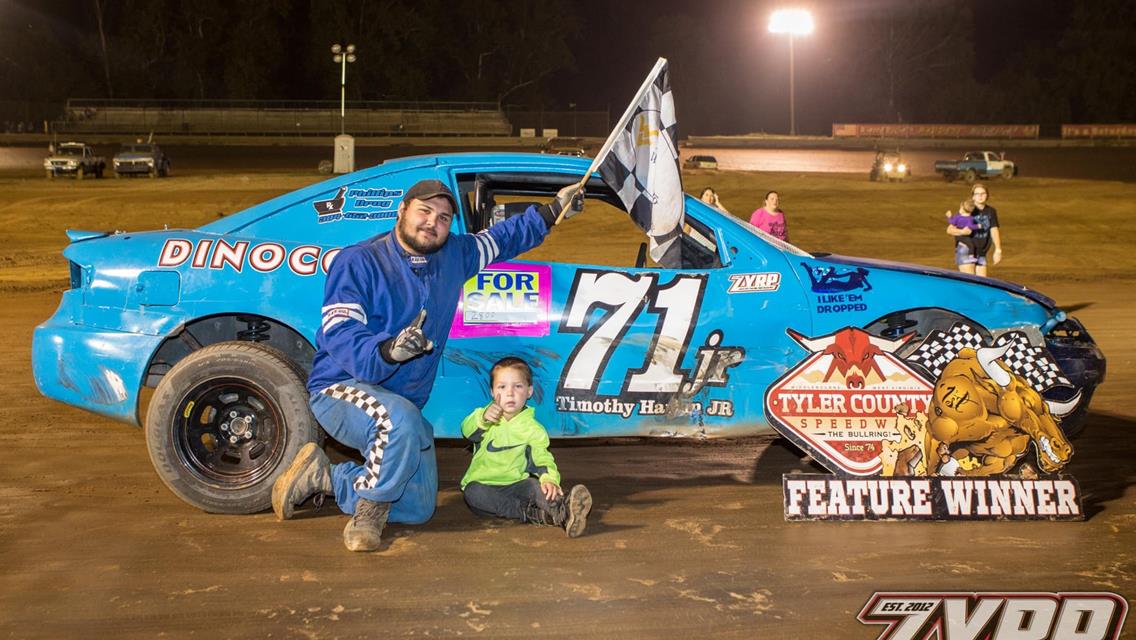 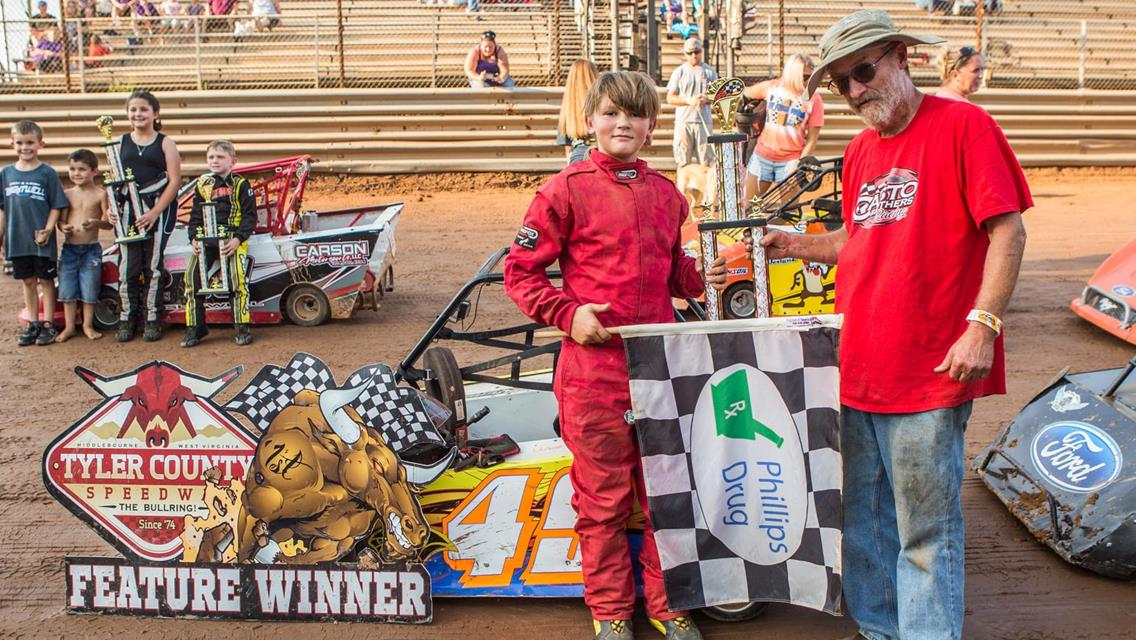